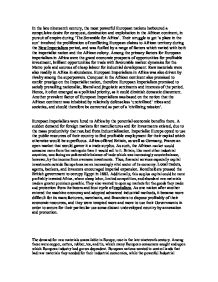 Explain the factors which attracted European imperialism either to Africa or to Asia in the later nineteenth century.

In the late nineteenth century, the most powerful European nations harboured a compulsive desire for conquest, domination and exploitation in the African continent, in pursuit of empire during 'The Scramble for Africa'. Their struggle to get 'a place in the sun' involved the proliferation of conflicting European claims to African territory during the New Imperialism period, and was fuelled by a range of factors which varied with both the imperialist nation and the African colony. Among the primary factors for European imperialism in Africa were the grand economic prospects of opportunities for profitable investment, brilliant opportunities for trade with favourable market dynamics for the Metro pole and sources of cheap labour for industrial development. Raw materials were also readily in Africa in abundance. European Imperialism in Africa was also driven by rivalry among the superpowers. Conquest in the African continent also promised to confer prestige on the Imperialist nation, therefore European Imperialism promised to satisfy prevailing nationalist, liberal and jingoistic sentiments and interests of the period. Hence, it often emerged as a political priority, as it could diminish domestic discontent. Another prevalent factor of European Imperialism was based on the notion that the African continent was inhabited by relatively defenseless 'uncivilized' tribes and societies, and should therefore be converted as part of a 'civilizing mission'. ...read more.

Africa was rich in raw materials, as well as a many treasure reserves. Europeans were able to build plantations where they grew peanuts, palm oil, cocoa, and rubber. They also took important minerals. The Congo produced copper and tin. South Africa had gold and diamonds. Karl Peters, a German explorer called on Bismarck to help consolidate the gains of his German East Africa company. George Goldie asked the British government for help to consolidate his palm-oil economy on the Niger river. Owners of gold mines and diamond mined pressed the British Government to protect their interests in South Africa. Major industrial companies attempted to gain a monopoly of raw materials in Asia and Africa. International rivalry among European nations was a major source of imperialist ventures in Africa. The British government wished to maintain its dominance in the colonial spheres; as other European powers sought to expand, the British responded by seizing colonies. Geopolitics made certain territories important for its location, such as the Suez Canal, while some countries seized regions to prevent other European states from seizing them. The vast interior - between the gold- and diamond-rich Southern Africa and Egypt, had key strategic value. Domination of this region was important to securing the flow of overseas trade. ...read more.

had sought to extend its own holdings from Dakar to the Sudan, which would enable its empire to span the entire continent from the Atlantic Ocean to the Red Sea. Though hampered by German occupation of Tanganyika until the end of World War I, Rhodes successfully lobbied on behalf of such a sprawling East African empire. Local nationalist movements also played their part: some sought to defend territory in Africa and Asia, others wanted to collaborate with specific European powers in order to retain some semblance of local influence. Nationalism fed the drive for empires as well. A nation often felt that gaining colonies was a measure of its greatness. The French saw its empire partly in terms of economic gain and partly in terms of helping to restore its damaged national pride after its defeat by Germany in the Franco-Prussian war. King Leopold II of Belgium sought an empire to enhance his own status and for purely economic reward. The Italians coveted territory to emphasize their claims to be treated as a major European power. The German government often used imperialism to increased its popularity at home. Nationalist concerns translated into the national prestige that came as a result of gaining large expanses of territory and seeing the color of your country painting regions throughout Africa and Asia. ...read more.