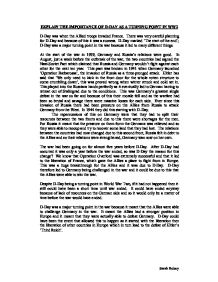 Explain the Importance of D-Day As a Turning Point In Ww2.

EXPLAIN THE IMPORTANCE OF D-DAY AS A TURNING POINT IN WW2 D-Day was when the Allied troops invaded France. There was very careful planning for D-Day and because of this it was a success. D-Day marked 'The start of the end'; D-Day was a major turning point in the war because it led to many different things. At the start of the war in 1939, Germany and Russia's relations were good. In August, just a week before the outbreak of the war, the two countries had signed the n**i-Soviet Pact which claimed that Russia and Germany wouldn't fight against each other for the next ten year. This pact was broken in 1941 when Germany launched 'Operation Barbarossa', the invasion of Russia as a three-pronged attack. ...read more.

Ever since this invasion of Russia there had been pressure on the Allies from Russia to attack Germany from the West. In 1944 they did this starting with D-Day. The repercussions of this on Germany were that they had to split their resources between the two fronts and due to this there were shortages for the men. For Russia it meant that the pressure on them form the Germans was relieved and so they were able to recoup and try to recover some land that they had lost. The relations between the countries had now changed due to this second front, Russia felt in debt to the Allies and so their relations were strengthened, Germany was now on her own. ...read more.

Despite D-Day being a turning point in World War Two, if it had not happened then it still could have been a short time until war ended. It could have ended anyway because of lack of resources on the German side and so it would only be a matter of time before the war would have ended. D-Day was a major turning point in the war because it meant that the Allies were able to challenge Germany in the war. It meant the Allies had a stronger position in Europe and it meant that they were actually able to defeat Germany. D-Day could have been the event that allowed this to happen as it started with the liberation then the liberation of other countries in Europe which in turn lead to the defeat of Hitler's 'Third Reich'. Sarah Belsey ...read more.