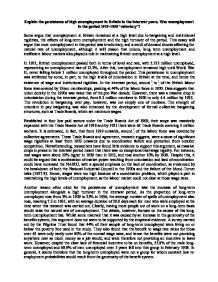 Explain the persistence of high unemployment in Britain in the interwar years. Was unemployment in the period 1919-1939 'voluntary'? Some argue that unemployment in Britain remained at a high level due to bargaining and institutional rigidities, the effects of long-term unemployment and the high turnover of the period. This essay will argue that most unemployment in this period was involuntary, and a result of demand shocks affecting the natural rate of unemployment, although it will reason that unions, long term unemployment and inefficient labour markets also played a role in maintaining British unemployment at a high level. In 1921, British unemployment peaked both in terms of level and rate, with 2.212 million unemployed, representing an unemployment rate of 12.2%. After this, unemployment remained high until World War II, never falling below 1 million unemployed throughout the period. This persistence in unemployment was attributed by some, in part, to the high levels of unionisation in Britain at the time, and hence the existence of wage and institutional rigidities. In the interwar period, around to of the British labour force was covered by Union memberships, peaking at 44% of the labour force in 1920. Data suggests that union density in the 1920s was twice that of the pre-War decade. However, there was a massive drop in unionization during the interwar period, from 8.3 million members in 1920 to only 4.4 million by 1933. ...read more.

20% of those unemployed for more than 3 months were not able to get reemployed within three months, whilst 80% of those employed for 9 to 12 months were not able to get reemployed even after a year. Hence, as the employability of the workforce fell with time, the natural rate of unemployment rose; according to Crafts' estimates, this rise was of 1.5% in the 1930s. Crafts also finds that a 1% increase in long-term unemployment leads to a 0.2 percentage point increase in the wage rates. This shows that the unemployed were not being able to efficiently bring down average wages, as only 'insiders' could do this. Thus, it was the flow of unemployment which mattered to wages, and not the stock. High turnover is another factor worth considering. Although it is sometimes blamed on casual workers, as statistics show that in the interwar period, 25-35% of casual workers were unemployed at any one time, this does not seem like a reasonable assumption as only about 4% of the total unemployed were casual workers in the 1930s. However, the high turnover does appear to be a significant problem, considering it produced results equivalent to half of the labour force having a period of unemployment during any one year. This could, in part, be explained by temporary lay-offs, the oxo system and short time working. For instance, in 1924-1929, 18% of cotton workers were on short time working schemes, which meant they worked 14 hours less than average per week. ...read more.

were "unemployable". There was, therefore, a certain degree of voluntary unemployment amongst the long-term unemployed. Crafts also found that workers chose not to leave their families in "outer Britain", where they couldn't find a job, instead of moving to look for work, and thus preferred survival on allowances to migration, which again shows there was a certain degree of voluntary unemployment in the economy, albeit not a lot. Most unemployment was involuntary, initially due to internal demand shocks, and later due to external shocks. Another important point to note is that, although this essay ran through the main reasons for the persistence of the high unemployment in Britain, the reasons varied a lot from the 1920s to the 1930s. In the 1920s, real wages increased and there was an appreciation of the exchange rate, causing some people to choose more hours of leisure. This supply shock affected the economy, as did announcements of return to the gold standard and a fall in prices, which caused unemployment in the 20s. In the 1930s, however, real wages were at an unsustainably high level, thus accounting for 75% of job losses in the period 1929-1932. This was due to falling import prices as a result of the slump, and demand shocks, despite sticky nominal wages, which meant market couldn't clear. Therefore, different effects were taking place at different points in time to maintain the high unemployment, which was mostly involuntary. These include, but are not limited to, demand shocks, coordination failure and the lack of reemployability of the long-term unemployed. ...read more.