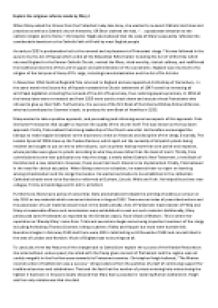 Explain the religious reforms made by Mary I

Transfer-Encoding: chunked ﻿Explain the religious reforms made by Mary I When Mary seized the throne from the Protestant Lady Jane Grey, she wanted to re-assert Catholic doctrines and practices as well as a Catholic church hierarchy. GR Elton claimed she had, ?? a passionate devotion to the catholic religion and to Rome.? Christopher Haigh also believed that the scale of Mary?s popularity reflected the considerable devotion to the Catholic faith still held by most English people. As early as 1553 a proclamation led to the removal and replacement of Protestant clergy. This was followed in the autumn by the Act of Repeal which undid all the Edwardian Reformation including the Act of Uniformity which returned England to the Roman Catholic Church, revived the Mass, ritual worship, clerical celibacy, and reaffirmed the traditional doctrine of the Lord?s Supper and administration of the sacraments. ...read more.

Pole instituted 4 measures that sought to improve the quality of the church itself. This was known as the top down approach. Firstly, Pole realised that strong leadership of the Church was vital. He therefore encouraged the bishops to make regular visitations to the dioceses to check on finances and discipline of the clergy. Secondly, The London Synod of 1555 drew up the Twelve Decrees, which spelt out the necessity of all parish priests being resident and sought to put an end to other abuses, such as priests having more than one parish and nepotism, where parishes were given to priests according to who they knew rather than the basis of merit. Thirdly, Pole commissioned some new publications to help the clergy: a newly edited Catholic New Testament, a new Book of Homilies and a new catechism. ...read more.

Trials and executions began some being important members of the clergy including Archbishop Thomas Cranmer, bishops Latimer, Ridley and Hooper but most were humble folk. Executions began in February 1555 and there were 300 in total lasting until November 1558 and concentrated in the sees of London and Norwich. Much of England saw no burnings at all. To conclude, three key features of the change back to Catholicism explain the success of the Marian Restoration: she acted without undue speed; she acted with the freely given consent of Parliament and the regime was not unduly vengeful in the first few years towards its Protestant enemies. Christopher Haigh believed, ?The Marian reconstruction of Catholicism was a success,? citing evidence from the parishes of proof of continuing support for traditional services and celebrations. That and the fact that the number of priests entering holy orders being the highest it had been in 30 years clearly showed that Mary had succeeded in restoring Roman Catholicism. Haigh said her only mistake was that she died. ...read more.