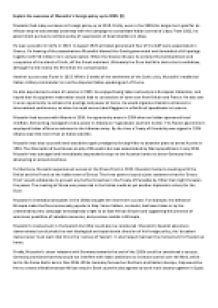 Explain the successes of Mussolinis foreign policy up to 1939.

Transfer-Encoding: chunked ﻿Explain the successes of Mussolini?s foreign policy up to 1939. [8] Mussolini had many successes in foreign policy up to 1939. Firstly, even in the 1920s his longer-term goal for an African empire was already underway with the campaign to consolidate Italian control of Libya. From 1922, his government pursued a ruthless policy of suppression of local rebellions in Libya. He was successful in Corfu in 1923. In August 1923 an Italian general and four of his staff were assassinated in Greece. On hearing of the assassinations Mussolini blamed the Greek government and demanded a full apology together with 50 million lire in compensation. ...read more.

Mussolini had success with Albania in 1926. An opportunity arose in 1924 when an Italian-sponsored local chieftain, Ahmed Zog, managed to take power in Albania on Yugoslavia's southern border. The Fascist government employed Italian officers as advisers to the Albanian army. By the time a Treaty of Friendship was signed in 1926 Albania was little more than an Italian satellite. Mussolini was also successful and was able to gain prestige by forcing Hitler to abandon plans to annex Austria in 1934. The Chancellor of Austria was an ally of Mussolini but was assassinated by Nazi sympathisers in July 1934. Mussolini was outraged and immediately despatched troops to the Austrian border to deter Germany from attempting an armed Anschluss. ...read more.

Mussolini?s involvement in the Spanish Civil War could also be considered. Mussolini?s Spanish adventure demonstrated conclusively the new ideological and expansionist direction of his foreign policy; the ?decadent democracies? must learn that this is the ?century of fascism?. It also helped maintain the momentum for Fascism at home. Finally, Mussolini?s closer relations with Germany towards the end of the 1930s could be considered a success. Germany promised that they would not interfere with Italy?s ambitions to increase control over the Med, which led to the Rome Berlin axis in Nov 1936. While Germany focused on Northern and Eastern Europe, Italy would be free to create a Mediterranean-African empire. Both countries also agreed to work more closely together in Spain. ...read more.