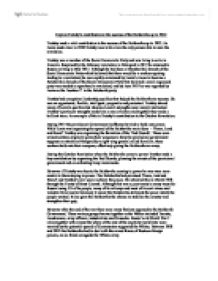 Explain Trotsky's contribution to the success of the Bolsheviks up to 1922 Trotsky made a vital contribution to the success of the Bolsheviks up to 1922. As Lenin made clear in 1918 Trotsky was in his view the only person able to save the revolution. Trotsky was a member of the Social Democratic Party and was living in exile in America. Surprised by the February revolution in Petrograd in 1917 he returned to Russia arriving in May 1917. Although he had been a Menshevik (a branch of the Social Democratic Party which believed that there would be a workers uprising leading to a revolution) he was rapidly convinced by Lenin's views to become a Bolshevik (a branch of the Social Democratic Party that believed a small organised party was needed to spearhead a revolution) and by June 1917 he was regarded by Lenin as the 'number 2' in the Bolshevik party. Trotsky had exceptional leadership qualities that helped the Bolsheviks to success. He was an opportunist, flexible, intelligent, pragmatic and persistent. Trotsky shared many of Lenin's qualities but whereas Lenin's strengths were mainly intellectual Trotsky's particular strengths made him a man of action and together they made a brilliant team. ...read more.

It also gave the Bolsheviks the chance to stabilise the country and strengthen their grip. However after the end of the war there were many factions opposed to the Bolshevik Government. These various groups known together as the Whites included Tsarists, Landowners, army officers, industrialists and Cossacks. Russia's old World War 1 allies together with almost the whole of the rest of the capitalist world who were worried by the potential spread of Communism supported the Whites. Between 1918 and 1921 the Bolsheviks had to deal with the armed forces of fourteen foreign powers, on six fronts alongside the Whites army. Trotsky's greatest contribution to the success of the Bolsheviks up to 1922 was leading the fight against these over whelming odds. Firstly he had to create an army. The Bolsheviks had successfully damaged the Russian Army through propaganda encouraging mass desertions. Now Trotsky had to re-build an effective army. As he wrote 'We were constructing an army all over again and under fire at that... what was needed for this? It needed good commanders - a few dozen experienced fighters, a dozen or so Communists ready to make any sacrifice; boots for the bare footed, a bath house, propaganda, food, underwear, tobacco, matches.' ...read more.

He toured Russia constantly during the civil war in a special train which had everything required to fight a war. He was able to bring hope and help to wherever it was most needed. As Alexander Barmine said in his description of Trotsky's leadership: 'Gomel was just about to fall into enemy hands when Trotsky arrived. Then everything changed and the tide began to turn... The situation catastrophic 24 hours earlier had improved by his coming as if by a miracle.' In 1919 the foreign armies of intervention were withdrawn from Russia leaving the White Armies to fight alone. The White Armies never acted as a united force and that enabled Trotsky to fight them one at a time. By the end of 1919 the tide had turned and only isolated groups of Whites were still fighting. The Bolshevik government was safe for the time being. In conclusion, as Lenin's right hand man Trotsky made a massive contribution to the success of the Bolsheviks. Without his Red Guard and organisational skills the October Revolution may not have been the success it was. More importantly however during the Civil War when Bolshevism was threatened by overwhelming military odds Trotsky created a Red Army with unity and discipline and then led that army brilliantly to ultimate victory. ...read more.