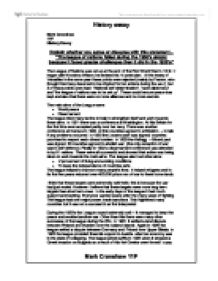 Explain whether you agree or disagree with this statement - &quot;The league of nations failed during the 1930's simply because it faced greater challenges then it did in the 1920's&quot;.

Mark Cranshaw 11P History Essay Explain whether you agree or disagree with this statement - "The league of nations failed during the 1930's simply because it faced greater challenges then it did in the 1920's" The League of Nations was set up at the end of the First World War in 1919. It began with Woodrow Wilson; he devised his 14 point plan. At the treaty of Versailles in the same year these points were rejected (mainly by France, who thought Germany deserved to be crippled for her actions during the war), but 3 of these points were kept; "National self determination", "open diplomacy" and "the league of nations was to be set up". These would ensure peace was kept and also that there were no more alliances and no more secrets. The main aims of the League were: * World peace * Disarmament The league tried many tactics to help to strengthen itself and work towards these aims. In 1921 there was a conference at Washington. At this Britain for the first time ever accepted parity over her navy. There was another conference at Geneva in 1924. At this countries agreed to arbitration - to talk if any problems occurred. In 1925 the Locarno pact was signed; countries promised to respect each others borders. ...read more.

By the end of the 30's prospects for peace were looking quite good; business was doing well, world leaders had made agreements outlawing war, Germany seemed to have put aside its bitterness, and the league had had some success in solving disputes. What is certain is that the league was successful during the 1920's. It prevented war occurrence during this time and kept the peace with few mistakes. The league did not deserve the criticism that it received during the 20's as it did its job but it did expose its weaknesses - these were exploited more during the 30's. The league failed in the 1930's because of several events. After the weaknesses of the Corfu crisis were exploited other countries began to take more of a gamble with the league. One of these countries was Japan. They were affected by the Wall Street crash and like America in a state of depression. The Japanese believed the only way to show there power and get themselves out of this state was to have a territorial conquest. Their destination was Manchuria, a Chinese province which was rich in raw materials. The Japanese already owned areas of Manchuria; they owned a railway line which ran throughout. ...read more.

No-one took the league seriously after this. I agree with the statement the league failed in the 1930's and not the 1920's simply because it faced greater challenges. During the 1920's people wanted to recover - not fight, by the 30's this recovering was complete. The bitterness between countries began to once again show. Few experimented with the leagues power because they were scared of it, but after its failures they realised its weaknesses and tested it. The Manchurian and Abyssinian crisis' just finished off the league. I believe that it failed because the USA did not join. If they had joined then the trade sanctions would have been more of a threat. It also had no real power as it relied on goodwill and persuasion. Its aims were very optimistic and it had high expectations because of this. Its structure was a disaster. Everyone needed to agree before any action could be taken. This gave major powers the power to veto anything it did not like. For example Britain could have invaded any country and just vetoed any decisions made by the league about it. Overall the League failed in the 1930's and not the 1920's because dictators (such as Mussolini, Hitler or Army leaders - like in Japan) were prepared to defy it after its mistakes in the 1920's. Also it faced much bigger challenges in the 30's than it did in the 20's. History essay Mark Cranshaw 11P ...read more.