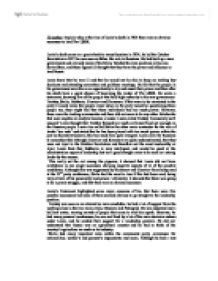 Explain why; at the time of Lenins death in 1924 there was no obvious successor to lead the USSR.

12 marker: Explain why; at the time of Lenin's death in 1924 there was no obvious successor to lead The USSR. Lenin's death came as a great shock to many Russians in 1924; he led the October Revolution in 1917 he was seen as father like role to Russians. He had built up a new government and allowed many of his fellow Bolsheviks roles positions in his new Soviet State, and these figures all thought that they have the power and influence to lead Russia. Lenin knew that he was ill and that he would not be able to keep on making key decisions and attending committee and politburo meetings. He felt that the people in his government saw this as an opportunity to try and assert their power and then after his death have a good chance of becoming the leader of The USSR. He wrote a testament, damning five of the people that held high authority in his new government: Trotsky, Stalin, Bukharin, Zinoviev and Kamenev. ...read more.

Ultimately, it showed that there was going to be a power struggle, and that there was no obvious successor. Lenin's Testament highlighted some major concerns of his, that there were five possible successors but none of them seemed obvious to go straight to the leadership position. Trotsky was seen as an alternative main candidate, he had a lot of support from the working class in the two main cities, Moscow and Petrograd. He was educated and a brilliant orator, moving crowds of people that came to visit him speak. However, he had many personal weaknesses, he was not liked by a lot of the main decision makers under Lenin, and he needed their support for a leadership position. He did not understand that Russia was an agricultural country and he had to think of the country's agriculture as much as its industry. Stalin had many important roles within the communist party, commissar for nationalities, worker's and peasant's inspectorate and more. ...read more.

Also, because Lenin's Testament was not published it did not allow the party to make a decision on the leadership, alongside the ban on factions meant that a candidate would just have to seem like a strong runner individually or resort to backstabbing. In conclusion, I believe that by not publishing Lenin's testament, this meant that his personal opinions were not voiced to the party, at the party conference, where hundreds of the most influential communists would have seen that all of the main five candidates had weaknesses and there was not one that Lenin felt was singly good enough to rule the party. He was possibly hinting to a collective government with a coalition between all five, mixing their positive aspects to make a great USSR. Although the ban on factions was important, the Testament would have voiced the weaknesses of the five people in the running for leadership coming straight from Lenin his conclusion would have gained influence from the party that was loyal to him. Therefore, I believe that by not publishing Lenin's testament meant that there was great uncertainty over the role of leader. ...read more.