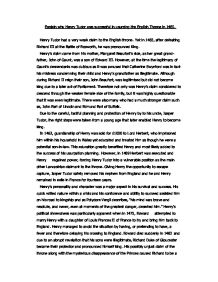 Explain why Henry Tudor was successful in usurping the English Throne in 1485.

Explain why Henry Tudor was successful in usurping the English Throne in 1485. Henry Tudor had a very weak claim to the English throne. Yet in 1485, after defeating Richard III at the Battle of Bosworth, he was pronounced King. Henry's claim came from his mother, Margaret Beaufort's side, as her great grand-father, John of Gaunt, was a son of Edward III. However, at the time the legitimacy of Gaunt's descendants was dubious as it was accused that Catherine Swynford was in fact his mistress condemning their child and Henry's grandfather as illegitimate. Although during Richard II reign their son, John Beaufort, was legitimised but did not become king due to a later act of Parliament. Therefore not only was Henry's claim considered to descend through the weaker female side of the family, but it was highly questionable that it was even legitimate. There were also many who had a much stronger claim such as, John Earl of Lincoln and Edmund Earl of Suffolk. ...read more.

His possibly unjust claim of the throne along with the mysterious disappearance of the Princes caused Richard to be a highly unpopular monarch. This is shown through the many plots and revolts against him, (such as that of Buckingham's in October 1483 and Edward household in July 1483). Consequently a number of Yorkist rebels began to seek an alternative leader, surprisingly finding suitable representation in Henry, the main Lancastrian claim to the throne. This was no doubt aided by the politically shrewd promise that once in power he would attempt to reunite the two families by marrying the major Yorkist heiress, and in their eyes the rightful monarch, Elizabeth of York. Whilst living in France Henry remained in contact with Lancastrian supporters in England and although Richard had a lot of followers in the North, the more influential and important backing of the southern nobilities was not won over- leaving it more likely to be open to the possibility of Lancastrian invasion. ...read more.

The two armies met in Market Bosworth near Sutton Cheney in Leicestershire on the 22nd of August. Henry was clearly out numbered by the king's soldiers and although his army had now grown to about 6,000 Richards outnumbered them by about two to one. The decisive moment came when Richard made a direct charge at Henry causing Sir William Stanley's army to rush to his rescue. With the crucial aid of the Stanleys the battle was won, Richard was slaughtered and the remaining Yorkists fled. Sir William Stanley crowned Henry on the conclusion of the battle and Richard's naked body was paraded back to London. It was Henry Tudor's "political wisdom", "notable" experience and his "dealing in time of perils and dangers" with, "great hardiness" (John Fisher, Bishop of Rochester) that greatly contributed to his success in obtaining the English throne. The support, guidance and military expertise form Jasper Tudor along with the financial help from the French king and the support not only from loyal Lancastrians but from the rebel Yorkists, also aided Henry in usurping the throne in 1485. ...read more.