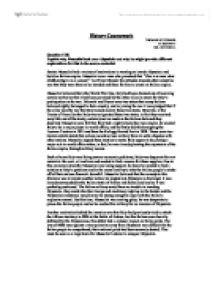 Explain why Mussolini took over Abyssinia and why he might provide different explanations for this in the source material.

History Coursework THOMAS HITCHINGS 11 JME 643 T MR. MITCHELL Question 4 (ii) Explain why Mussolini took over Abyssinia and why he might provide different explanations for this in the source material. Benito Mussolini had a variety of motivations in wanting to invade Abyssinia and build an Italian empire. Mussolini was a man who preached that "War is to men what childbearing is to a women!" As Prime Minister his attitudes towards other countries was that they were there to be invaded and there for him to create an Italian empire. Mussolini believed that after World War One, Italy had been cheated out of receiving certain territories that it had been promised by the other allies in return for Italy's participation in the war. Dalmatia and Fiume were two states that many Italians believed rightly belonged to their country, and in joining the war it was pledged that if the allies won the war that Italy would receive these two states. ...read more.

Due to this economic downfall Mussolini was losing support, he knew he needed to find a solution to Italy's problems and in the mean time try to take the Italian people's minds off of their nations financial downfall. Mussolini believed that the remedy to this dilemma was to invade another nation, he singled out Abyssinia as his target, it was already surrounded by the Italian states of Eritrea and Somaliland and so it was perfectly positioned. The Italian military would have no trouble in invading Abyssinia, they could take their troops and machinery right up to the border and the Abyssinian resistance would never be strong enough to cope with the Italian's explosive arsenal. By this time, Mussolini was craving glory, he was desperate to please the Italian people and so he readied his military for an invasion of Abyssinia. Another motivation behind the invasion was that Italy had previously tried to attack the African territory in 1896 at the Battle of Adowa, but the Italians were heavily defeated by the Abyssinians; this defeat had a colossal impact on Italian pride. ...read more.

a sensitive nerve with the Italian people as it is likely to have affected them all much more greatly than any other of Mussolini's desires for war. When writing to the British in source E his argument was that he felt he should be able to expand Italy's empire, as this is exactly what countries like Britain had already done. This argument was chosen for the British as the Italian invasion would be seen a lot less favourably if Mussolini's reasoning was that he was taking what he deserved after the allies failed to live up to their word after the first world war, it would not have been a good idea to criticise Britain in case they, on behalf of the League of Nations, had launched a military attack on Italy in response to the invasion of Abyssinia. And so, in source E the Mussolini tried to 'spin' his reasoning's for war on Abyssinia so that they looked more acceptable to the British. ...read more.