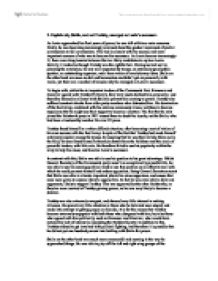 2. Explain why Stalin, and not Trotsky, emerged as Lenin's successor. As Lenin approached his final years of power, he was left with two main concerns. Firstly, he was becoming increasingly alarmed about the gradual movement of partial communism to full communism. This tied in closely with his second, and more important concern of who was to become his successor. As Lenin became increasingly ill, there was rising tension between the two likely candidates to replace Lenin. Initially, it looked as though Trotsky was the rightful heir. Having served well in planning the revolution, he was well respected by troops, an extremely good public speaker, an outstanding organiser, and a keen writer of revolutionary ideas. Stalin on the other hand was seen as dull and humourless and didn't get on personally with Lenin, yet there are a number of reasons why he emerged as Lenin's successor. To begin with, whilst the to important leaders of the Communist Part, Kamenev and Zinoviev agreed with Trotsky Politically, they very much disliked him personally, and therefore formed an alliance with Stalin to prevent him coming to power. ...read more.

Trotsky was also extremely arrogant, and showed very little interest in making alliances. He spared very little attention to those who he believed were stupid, and made little attempt at getting people on his side. It is for this reason that Trotsky became extremely unpopular with both those who disagreed with him, but also those who agreed with him politically, such as Kamenev and Zinoviev, who would have noticed his lack of interest in expanding the Bolshevik party. In addition to this, Trotsky refused to get involved with political fighting, and therefore it is possible that he did not put one hundred percent into battling with Stalin for power. Stalin on the other hand was much more resourceful and cunning in the way he approached things. He was able to play off the left and right wing groups of the Communist Party causing them to turn against each other. For example, he played off the right-wing party members, Kamenev and Zinoviev, using their fear of right wing members such as Trotsky, and international communism to persuade them to form an alliance with him. ...read more.

Having said this, Stalin's 'Socialism in One County' proposal was unpopular amongst many left-wing members of the Communist party, however he was able to use the new support gained from his recent proposals to overcome this opposition, and ousted the left-wing members from their positions. The final event that helped Stalin into power was his survival of Lenin's Testament. Shortly before his death, Lenin wrote letter to the party congress to be read out after his death. In it, Lenin recommended that Stalin should be removed from his position as General Secretary of the Communist Party, and replaced. Things did not look good for Stalin if this letter was to get out, however to his delight, the Central Committee took the decision not to publish this letter, in order to avoid provoking further disunity after the civil war. By 1928, Stalin had achieved charge of the Soviet union, and successfully blocked Trotsky from following in Lenin's footsteps. In my opinion, this is largely down to his extremely strong position within the party, and his luck in avoiding Lenin's testament being published. ...read more.