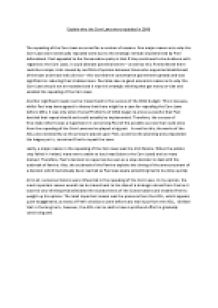 Explain why the Corn Laws were repealed in 1846

Transfer-Encoding: chunked ﻿Explain why the Corn Laws were repealed in 1846 The repealing of the Corn Laws occurred for a number of reasons. One major reason as to why the Corn Laws were eventually repealed were due to the strategic retreats implemented by Peel beforehand. Peel appealed to the Conservative party in that if they continued to be stubborn with regards to the Corn Laws, it could alienate potential voters ? as well as this, Peel believed there could be a major crisis caused by conflicts of opinion between those who supported abolishment of the laws and those who did not ? this worried the conservative government greatly and was significant in reducing their stubbornness. ...read more.

This is because, whilst Peel may have agreed in theory that there might be a case for repealing the Corn Laws before 1841, it was only when the tariff reforms of 1842 began to prove successful that Peel decided that repeal should and could actually be implemented. Therefore, the success of free-trade reforms was a huge factor in convincing Peel of the possible success that could arise from the repealing of the Corn Laws and so played a big part. As well as this, the works of the ACLL was noteworthy as the pressure placed upon Peel, as well as the planning and preparation the league put in, convinced Peel to repeal the Laws. ...read more.

All in all, numerous factors were influential in the repealing of the Corn Laws. In my opinion, the most important reason overall can be traced back to the idea of a strategic retreat from Peel as it was this very thinking that alleviated the stubbornness of the Conservatives and enabled Peel to weight up his options. The least important reason was the pressure from the ACLL, which appears quite exaggerated, as many of Peel?s decisions came before any real input from the ACLL. I believe that in the long term, however, the ACLL can be said to have a profound effect in gradually convincing peel. ...read more.