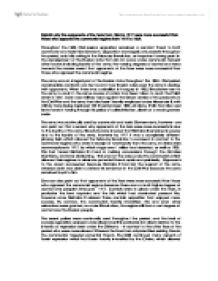 Explain why the opponents of the Tsars from 1855 to 1917 were more successful than those who opposed the communist regime from 1917 to 1964.

Explain why the opponents of the Tsars from 1855 to 1917 were more successful than those who opposed the communist regime from 1917 to 1964. Throughout the 1855-1964 period, opposition remained a constant threat to both communist and tsarist Governments. Opposition was largely unsuccessful throughout the period, only fully uniting in the February Revolution, an important turning point in the development of the Russian state that did not occur under communist. Several other factors including loyalty of the army, the varying degrees of control and terror towards the masses meant that opponents of the Tsars were more successful than those who opposed the communist regime. The army was an integral part of the Russian state throughout the 1855-1964 period, considerable continuity can be found in how Russian rulers used the army in dealing with opponents. When there was a rebellion in Hungary in 1955, Khrushchev sent in the army to crush it, the same course of action had been taken to crush the Polish revolt in 1861. Lenin used military force against the Green armies of the peasantry in the Civil War and the army had also been heavily employed under Alexander II, with military force being deployed 185 times between 1855-60 alone. ...read more.

The secret police were continually used throughout the period, and the lack of success opposition enjoyed under Alexander III in particular is in direct relation to the intensity of repression seen under the Okhrana - in contrast to the other Tsars of the period who were more relaxed. Whereas the Tsars had only identified existing threats, the communists targeted potential threats. The KGB continued many aspects of Tsarist repression which had been heavily intensified by the Cheka, which allowed Stalin to remove all traces of opposition including Zinoviev, Kamenev and the exiled Trotsky. Under the communists, new elements of control which were not present in Tsarist Russia sprang up. Millions of informants helped identify potential threats which reduced the effectiveness of opposition, and the workers were under much closer scrutiny. Discipline in the workplace had increased severely under Lenin and in addition to continuing this, the 5 year plans brought with them GOSPLAN and communal housing which allowed the regime to further control the workers, whose role was key to the success of the 1917 revolution. ...read more.

In contrast to the February Revolution where opponents had united and succeeded, the white armies during the Civil War were divided to such an extent that Lenin was able to defend his revolution. Stalin's Kulak purges were not met with high resistance because not all peasants shared the same vision as the Kulaks, and in a similar fashion Lenin was able to crush the Kronstadt rebellion. The lack of unity in mainstream politics is another reason why opponents to the communists were less successful than opponents to the tsars. In contrast to Nicholas II who was forced to abdicate as there was widespread opposition to him, Stalin was able to eliminate opponents in the Politburo one by one and maintain power. In conclusion, opponents to the Tsars from 1855 to 1917 were more successful than those who opposed the communist regime post 1917. The Tsarist regime only sought to eliminate existing threats which allowed some opponents to remain undetected, this was not the case under the communists. Similarly, the increase in repression seen under the communists had eliminated any trace of opposition, whereas Tsarist repression had merely aggravated opposition, resulting in the February Revolution which removed them from power. ...read more.