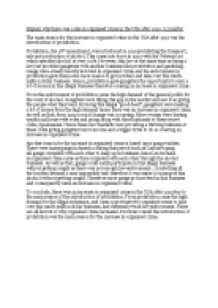 Explain why there was a rise in organised crime in the USA after 1919.

﻿Explain why there was a rise in organised crime in the USA after 1919. (12 marks) The main reason for the increase in organised crime in the USA after 1919 was the introduction of prohibition. Prohibition, the 18th amendment, was introduced in 1919 prohibiting the transport, sale and production of alcohol. This came into force in 1920 with the Volstead act which specified alcohol at over 0.5%. However, this law at the same time as being a law just provided gangsters with another business like prostitution and gambling. ...read more.

Gangsters were filling this gap in the market and saw it as giving the people what they want. By doing this illegal ?good deed?, gangsters were making a lot of money from the high demand hence there was an increase in organised crime. As well as that, from 1919 a social change was occurring. More women were leaving traditional house wife roles and going along with their husbands to these secret clubs, Speakeasies. Hence these new markets were providing a thriving business at these clubs giving gangsters more income and a bigger drive to do so creating an increase in organised crime. ...read more.