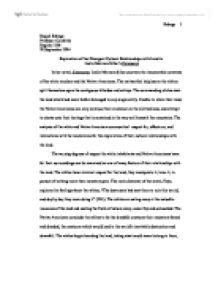 Raquel Rabago Professor Combiths English 1106 20 September 2004 Exploration of the Divergent Cultural Relationships with Land in Leslie Marmon Silko's Ceremony In her novel, Ceremony, Leslie Marmon Silko uncovers the innumerable contrasts of the white ranchers and the Native Americans. The natives feel helpless as the whites spill themselves upon the contiguous hillsides and valleys. The commanding whites steal the land which had never before belonged to any single entity. Unable to retain their land, the Native Americans can only continue their existence on the allotted land, and attempt to cleave unto their heritage that is contained in the very soil beneath the mountains. The analysis of the white and Native American communities' respect for, effects on, and interactions with the land allows for the exploration of their cultural relationships with the land. The varying degrees of respect the white inhabitants and Native Americans have for their surroundings can be examined as one of many factors of their relationships with the land. The whites have minimal respect for the land; they manipulate it, tame it, in pursuit of nothing more than monetary gain. The main character of the novel, Tayo, explores his feelings about the whites, "The destroyers had sent them to ruin this world, and day by day they were doing it" (204). ...read more.

The stolen land never allows the whites to feel adequate or powerful, this was the great lie; the lie which only made them aware of what they truly possess in the eyes of time and toll, nothing. The whites are destroying the land, causing an internecine effect on themselves and those close by. As the earth writhes under the hands of evil-doers, she punishes them with their own sinister enterprise "they had taken these beautiful rocks from deep within the earth and they had laid them in a monstrous design, realizing destruction on a scale only they could have dreamed" (246). As the whites probe and prod the land for sources of undiscovered glory, they find an element that will bring destruction to themselves and others. They are shaken from the tiers of their cloud-grazing pedestal by the rumble of their own foolish pride. In contrast, the Native Americans adapt to the land in order to destroy as little as possible. They rely on the earth for all means of sustenance, "These springs came from deep within the earth, and the people relied on them even when the sky was barren and the winds were hot and dusty" (94). The Native Americans are grateful and praise the earth even in the seasons the land has little to offer. ...read more.

The ceremony Betonie performs on Tayo takes place in the mountain range above his home. Because of their close relationship with nature, the Native Americans are able derive power from the land in order to protect themselves from evils of the world. In reality, it matters little when the whites attempt to make the mountains their own; "It is the people who belong to the mountain" (128). Though the whites' small victories of fences and logging expeditions take their toll on the land, Tayo and some of the other natives realize that the land is theirs alone. The Native Americans will always be the people of the land because of the relationship with the rain and the clouds, hovering over the wide valleys, watching them, their children. The differences between the Native Americans and the whites expand beyond their diametrically opposed ways of life. The sentiments of the people are what has diverged their paths to such an exponential degree. The desires of the whites center upon domination, power, and control. These spoils lead them to poach and pilfer the once unblemished lands. The land will never be their own because of their perversion and destructive nature. Betonie, the Native American medicine man, remarks, "It is the people who belong to the mountain", (128). The only beings that can belong to the land are those who value the sacred nature of life and are gracious in receipt of even the most imperceptible of fortunes. ...read more.