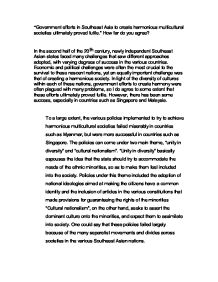 In the second half of the 20th century, newly independent Southeast Asian states faced many challenges that saw different approaches adopted, with varying degrees of success in the various countries. Economic and political challenges were often the most crucial to the survival to these nascent nations, yet an equally important challenge was that of creating a harmonious society. In light of the diversity of cultures within each of these nations, government efforts to create harmony were often plagued with many problems, so I do agree to some extent that these efforts ultimately proved futile. However, there has been some success, especially in countries such as Singapore and Malaysia. To a large extent, the various policies implemented to try to achieve harmonious multicultural societies failed miserably in countries such as Myanmar, but were more successful in countries such as Singapore. The policies can come under two main theme, "unity in diversity" and "cultural nationalism". "Unity in diversity" basically espouses the idea that the state should try to accommodate the needs of the ethnic minorities, so as to make them feel included into the society. Policies under this theme included the adoption of national ideologies aimed at making the citizens have a common identity and the inclusion of articles in the various constitutions that made provisions for guaranteeing the rights of the minorities "Cultural nationalism", on the other hand, seeks to assert the dominant culture onto the minorities, and expect them to assimilate into society. ...read more.

Even in Singapore, where the government has successfully created a harmonious society, there have been some minor sources of tension. For example, the launch of the "Speak Mandarin Campaign" and Special Assistance Programme schools were aimed at making Chinese Singaporeans more rooted to their culture, but this aroused fears of Chinese chauvinism. Another example would be the disadvantage that many ethnic minorities face in seeking employments because of the many employers that require employees to speak Mandarin. The tension generated by these issues can be said to affect the harmony of Singapore's society, albeit to a very small extent. Despite the many failures, however, to say that the governments' efforts to create harmonious societies have failed would be grossly misrepresenting the results of government efforts. After all, the territorial integrity of the various Southeast Asian states have been maintained, apart from the independence of Timor Leste from Indonesia. In countries like Malaysia, Singapore and Indonesia, a significant level of harmony has been achieved over the years, even if this harmony is only on the surface, as in the case of Indonesia, between the Javanese Malays and the Chinese. Even in Myanmar, some degree of stability has been achieved because of the ceasefires signed between the military government and the ethnic minorities. In present-day Myanmar, there is little harmony to speak about between the military government, which is largely influenced by the Burman majority, and the ethnic minorities. ...read more.

This was not helped by the move to centralise governance in the Burman-populated territories, as ethnic minorities feared that they would lose their autonomy. Hence, it can be said that the military governments failed to make concerted efforts to achieve harmony in the Burmese society, and so it was not that policies implemented failed, but that policies implemented failed to consider the interests of the ethnic minorities in the first place. A similar situation can be seen in Indonesia, although to a smaller extent. The discriminatory policies by the government against the Chinese minority perpetuated the resentment of the Javanese majority against the economic domination by the Chinese, and this inevitably led to the anti-Chinese riots in 1998. This shows that the lack of genuine harmony between the various racial groups could be attributed to some degree to the policies of the government. In conclusion, it can be said that the efforts by Southeast Asian governments to create harmonious societies were largely successful, especially in countries like Singapore and Malaysia where no major racial riots have broken out over the past few decades. Even in Indonesia and Myanmar, there is some degree of stability, though much of the problem lies in the lack of sincerity by the government's part in implementing policies. "Government efforts in Southeast Asia to create harmonious multicultural societies ultimately proved futile." How far do you agree? ...read more.