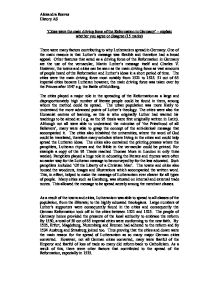 Cities were the main driving force of the Reformation in Germany(TM) &quot; explain whether you agree or disagree (15 marks)

Secularisation of lands previously owned by the Church brought even more revenue and supremacy, demonstrated by Albrecht of Hohenzollern, which attracted many Princes. Once the Princes themselves had become Lutheran, they converted their subjects to the new faith, thus spreading Lutheranism. Even though the Princes seem to play a major role in the spreading of Lutheranism, without the flexibility of the message and the towns and cities enabling the easiness for Lutheranism to spread, many Princes may not have converted at the risk of being in part of a failing reformed religion. However, Frederick the Wise backed Luther from the start and Philip of Hesse also converted in 1520. Therefore, the Princes cane to play a much bigger role in the spreading of the Reformation and be seen as taking over the main driving forces after 1525. The peasants themselves played a key role in the spreading of Lutheranism, in order for Luther's message to be successful and popular, it would have to spread from the original home in the cities. As it was flexible, accessible and appealing, it instantly made an impact in the countryside amongst the peasants. The scriptures which Luther so eagerly based his religion on were opened up to the rural districts by using woodcuts, rhyming passages and visits from Lutheran missionaries from the towns and cities. ...read more.

As a result of Charles not being present at such a crucial and changing time, Lutheranism was able to develop and spread without control or guidance of the Emperor. The importance of the Princes can also be seen as Charles V could not fight the Schmalkaldic league and be triumphant. Even when Charles did beat them in a battle, he still could not beat them, as the Princes can be viewed as semi-autonomous. However, even though Charles V was not present at this crucial time, the Reformation was inevitable to occur. With the rate at which Lutheran publications were being produced and the easy spread throughout the towns and cities, it can be seen that Lutheranism would unavoidably spread. In conclusion, many factors contribute to the spread of Lutheranism, yet the town and cities can be seen as the initial first main driving force of the Reformation, as without the large impact they played, the spread of Lutheranism may have been limited and not gained such a large following. However, it can be seen that the Princes over took the cities status of the driving force for the Reformation in the late 1520's, as the cities alone did not have the political clout to stand against Charles, whereas the Princes did. Without the Princes, the Reformation would not have succeeded to the extent that it did, as the Reformation needed someone to stand up to Charles V, and these were the only people who had the political power. ?? ?? ?? ?? Alexandra Reeves History AS ...read more.