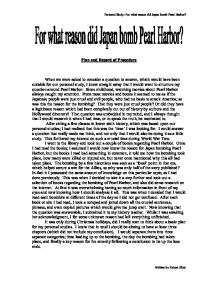 For what reason did Japan b**b Pearl Harbour?

Plan and Record of Procedure When we were asked to consider a question to answer, which would have been suitable for our personal study, I knew straight away that I would want to structure my question around Pearl Harbor. Since childhood, watching movies about Pearl Harbor always caught my attention. From most movies and books it seemed to me as if the Japanese people were just cruel and evil people, who had no basis to attack America; so was this the reason for the bombing? That they were just cruel people? Or did they have a legitimate reason which had been completely cut out of history by authors and the Hollywood directors? That question was embedded in my mind, and I always thought that I would research it when I had time, or to speak the truth, be motivated to. After sitting a few classes in lower sixth history, which was based upon our personal studies; I had realised that this was the 'time' I was looking for. I could answer a question that really made me think, and not only that I would also be doing it as a little study. This furthered my interest on such a crucial time during World War Two. I went to the library and took out a couple of books regarding Pearl Harbor. Once I had read the books; I assumed I would now know the reason for Japan bombing Pearl Harbor, but the books I read had something in common, it told me how the bombing took place, how many were killed or injured etc, but never once mentioned why this all had taken place. The bombing by a few historians was seen as a 'focal' point in that era, which helped secure a win for the Allies, so why was only half of the story published? In-fact it I possessed the same amount of knowledge on this particular topic, as I had done previously. ...read more.

A squadron of Japanese fighter planes had bombed the Pacific fleet. "2,403 dead, 188 destroyed planes and a crippled Pacific Fleet that included 8 damaged or destroyed battleship." This source helps us to understand the damage caused between three hours of intense battling between the Japanese and American forces; but it has to be noted that this may be an unreliable source due to the fact that the site which I had obtained this source from was written recently and as it was written so many years after the bombing, maybe some figures had been exaggerated, or mis-calculated. But it does help in giving a better picture of the chaos caused. It was as if one blow from the Japanese had decided the debate that had divided the Americans ever since the German defeat of France which left Britain alone in the fight against the n**i regime. Pearl Harbor was destined to enter the history books, due to the relations between America and Japan. "These had been deteriorating badly since the previous year, as disagreements arose over Japan's southward expansion on the Asiatic Continent." The Japanese took the advantage of Hitler's advance down the coast of China. The pressure of the war, had forced the French troops to comply with Japanese troops, which moved into northern Indo-China. They also asked the British to close the Burma Road, which was the last means of getting important supply into China. "By imposing a limited check on export of war materials to Japan, United States emerged as the principal obstacle to Japanese advance." As mentioned earlier, President Roosevelt had moved the Pacific Fleet from San Diego, to Pearl Harbor. This, in an indirect way, gave the impression that the Fleet was a 'p**n' in the diplomatic scheme. The Japanese said that it was due to the "ten-point memorandum", which forced Japan into war. The memorandum opposed and threatened expansion of Japanese 'land'. ...read more.

Now at this very moment I knew that United States was in the war, up to the neck and in to the death. So we had won after all! ... Hitler's fate was sealed ... Mussolini's fate was sealed. As for the Japanese, they would be grounded to powder." This shows that thee was a lot on stake if America did not join the war. This was shown when Winston Churchill said "Hitler's fate was sealed ... Mussolini's fate was sealed. . As for the Japanese, they would be grounded to powder." So in the end I would say that Americans Provoked the Japanese in bombing Pearl Harbor, and risked a lot of innocent American and other nationality lives. Just to get involved in a war that was so many thousands of miles away. There was no logic to both tactically ad normally speaking, to move and rename a whole fleet to the Pacific. From my own knowledge regarding this topic, I recall reading that ships which had been moved to Pearl Harbor were those which would be 'scarified' and others such as the Saratoga (an aircraft carrier) would be left near the West Coast. They had sent two carrier groups and its escorts out of the harbor, which would mean that they would not be hit. The new ships were also moved, leaving mainly those which were used in the First World War, behind. The theory was also further strengthened when Roosevelt had made a phone call to Lord Halifax and said, "Most of the fleet was at sea ... none of their newer ships were in the harbor". That tactic by historians was summed up by saying "the first shot without too much danger to ourselves". Books Read 1. The bombing of Hiroshima 2. Days of that shook the world Hiroshima 3. Japan: the years of triumph 4. The rise and fall of Imperial Japan 5. 20th Century Websites A. http://ibiscom.com/pearl2.htm B. http://yale.edu/lawweb/avalon/wwii/p1.htm C. http://yale.edu/lawweb/avalon/wwii/p3.htm D. http://ibilio.org/pha/Infamy_Speech/31-30344 E. http://RevisionNotes.co.uk Personal Study: For what reason did Japan b**b Pearl Harbor? Written by Faizan Khan ...read more.