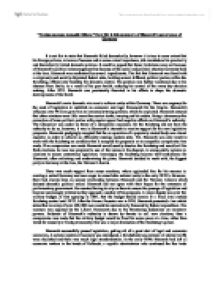 &quot;Foreign success; domestic failure.&quot; How fair is this summary of Bismarck's governance of Germany

"Foreign success; domestic failure." How fair is this summary of Bismarck's governance of Germany It is not fair to state that Bismarck failed domestically, however it is true to some extent that his foreign policies, in terms of success and to some extent importance, did overshadow his practically and theoretically limited domestic policies. It could be argued that these limitations were not because of Bismarck's political mismanagement but because of the social and political situation Germany held at the time. Bismarck was confronted by several impediments. The fact that Bismarck was faced with a religiously and socially disjointed federal state, holding several different political parties within the Reichstag, offered only hardship for domestic control. His position was further weakened due to his absence from Berlin, as a result of his poor health, reducing his control of the every day decision making. After 1871, Bismarck was persistently thwarted in his efforts to shape the domestic developments of the Reich. Bismarck's main domestic aim was to achieve unity within Germany. There was urgency for the need of legislation to establish an economic and legal framework for the Empire. Bismarck's influence over William gave him an immensely strong position, which he exploited. Bismarck ensured that other ministers were little more than senior clerks, carrying out his orders. Being a democracy the promotion of mass political parties with popular appeal had negative effects on Bismarck's authority. The Chancellor was under no threat of a democratic expulsion, for the Reichstag did not have the authority to do so, however, it was in Bismarck's interests to receive support for his own legislative proposals. Bismarck grudgingly accepted that the co-operation of a popularly elected body was almost essential in order to achieve an efficiently running modern state. Yet, Bismarck was only ready to work with the Reichstag on condition that it accepted his proposals or an acceptable compromise was made. ...read more.

The result of Kulterkampf was not what Bismarck expected. Attempts to repress Catholicism had been difficult in Catholic areas. Only 30 out of 10,000 Prussian Catholic priests submitted to the May Laws, Catholic communities sheltered defiant priests, fought for their religious culture and identity. Bismarck's plans to destroy Catholicism and the Centre Party had backed fired, it seemed that Catholicism was thriving on persecution. In 1871 the Centre Party won 58 seats, and in 1874 it had won 91 seats, Bismarck's aims to hold a popular Protestant crusade had also failed to materialise and by 1878, had accepted his failure. Relations began to ripen, following the death of Pope Pius IX, 1878, Bismarck was able to negotiate with his successor, Leo XIII. Falk was dismissed and exiled clergy were allowed to return to their positions. However, it was not all victorious for the Catholics. Many of the May Laws remained in force, Jesuits were forbidden to remain in Germany and the State continued to oversee all permanent Church appointments. Once again, Bismarck uses his experience in turning failure into an alternative success, harnessing Catholic political power in the Reichstag to deal with a potentially bigger threat, Socialism. Socialism was a threat to the kind of society that Bismarck intended to maintain. In 1869 Bebel and Liebknecht founded the Social Democratic Workers Party, a Marxist party committed to overthrow the bourgeoisie. IN 1875 moderate and revolutionary socialists united to form the German Social Democratic Part, the SDP. Its aim was to overthrow the existing order, but declared that it would use only legal means in the struggle for economic and political freedom. The party called for the nationalisation of banks, coal mines and industry and also for social equality. It won growing support for industrial workers. Bismarck acted rather against his beliefs by introducing state socialism, intending on winning over the working classes. This act was not entirely a political attack but there were aspects of benevolence, being a devout Christian, and believing in the promotion of the material well being of German workers. ...read more.

Furthermore, pro-French ministers in Russia seemed to be exerting great influence over the Tsar. In February1887 the Triple Alliance was renewed, Bismarck had persuaded Austria to promise to consult Italy on all matters affecting the Balkans, the Adriatic and the Aegean. In March 1887, with Bismarck's full backing, Britain, Austria and Italy signed the First Mediterranean Agreement, committing themselves to the maintenance of the status quo in the eastern Mediterranean. This action was very much anti-Russian. Events finally turned in Bismarck's favour. France avoided Russian feelers and conservative diplomats won the upper hand in St. Petersburg. Tsar Alexander III accepted that an alliance with Germany was better than nothing and signed the Reinsurance Treaty in June 1887. The agreement was that if a third power went to war on Germany, Russia would remain neutral, and vice versa. This treaty did not contravene with the Dual Alliance and was seen to be a masterpiece of Bismarck's diplomatic juggling. Finally, Bismarck secured peace in the Balkans and between the European powers by publishing the Dual Alliance in February 1888. This threatened Russia Germany would side Austria if war was to come about. This along with rumours of the Mediterranean Agreement persuaded Russia to leave the Balkans alone. It is clear that Bismarck's foreign policies had enabled safe guard to protect the German society and his aims were reached for peace in Europe. However if Russia had been a stronger force, war would have been inevitable. Bismarck's domestic policies were to some extent a failure, he was unable to defeat the Catholic threat and rid Socialism in Germany, however Bismarck was able to boost Germany's economy and able to secure his position and control radical groups. Significant ease in domestic tension was achieved and would be crucial to ensure stability in Germany. Without this stability, Bismarck would probably not have been able to control the Balkan Crisis and prevented a two front invasion on Germany. 1 The Unification of Germany 1815-90, Andrina Stiles and Alan Farmer ...read more.