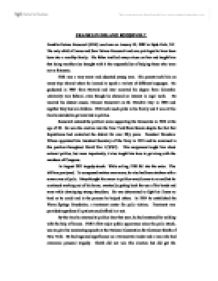 FRANKLIN DELANO ROOSEVELT Franklin Delano Roosevelt (FDR) was born on January 30, 1882 in Hyde Park, NY. The only child of James and Sara Delano Roosevelt and was privileged to have been born into a wealthy family. His father instilled many values on him and taught him that being wealthy also brought with it the responsibility of helping those who were not as fortunate. FDR was a very smart and educated young man. His parents took him on many trips abroad where he learned to speak a variety of different languages. He graduated in 1903 from Harvard and later received his degree from Columbia University Law School, even though he showed no interest in legal work. He married his distant cousin, Eleanor Roosevelt on St. Patrick's Day in 1905 and together they had six children. FDR took much pride in his family and it was at this time he decided to get involved in politics. Roosevelt entered the political arena supporting the Democrats in 1910 at the age of 28. He won the election into the New York State Senate despite the fact that Republicans had controlled the district for over fifty years. President Woodrow Wilson appointed him Assistant Secretary of the Navy in 1913 and he remained in this position throughout World War I (WWI). This assignment taught him about national politics, but more importantly, it also taught him how to get along with the members of Congress. ...read more.

On March 12th, Roosevelt began giving his famous "fireside chats" over the radio, explaining the new laws that were being passed and how the American citizens would benefit from them. Roosevelt described his reform program the "New Deal" as a use of authority of government; an organized form of self-help for all classes, groups and sections of our country. There were many different parts to the program, all of them working towards the goal of relief for the United States. Listed below are the different "New Deal" programs, when they went into effect and how they helped the people of America. � Agricultural Adjustment Act - 1933 - Protected farmers from price drops by providing crop subsidies to reduce production; Educational programs to teach methods of preventing soil erosion. � Civil Works Administration - 1933 - Provided public works jobs at $15.00 per week to four million workers. � Civilian Conservation Corps - 1933 - Sent 250,000 young men to work camps to perform reforestation and conservation tasks. Removed surplus of workers from cities, provided healthy conditions for boys, provided money for families. � Federal Emergency Relief Act - 1933 - Distributed millions of dollars in direct aid to unemployed workers. � Federal Deposit Insurance Corporation - 1933 - Created federally insured bank deposits ($2500 per investor at first) to prevent bank failures. � National Industrial Recovery Act - Created to enforce codes of fair competition, wages, and bargaining for workers. ...read more.

Their goal was to drive all Italians, Germans and Japanese out of any territory where they did not belong, beginning with North Africa. In 1944, FDR was ready to retire but felt strongly that it was his duty to run for a fourth term since the war was still going on. He was re-elected President of the United States for the fourth time, even though his health was failing. He met with Churchill and Stalin for the Yalta Conference in the Soviet Union in February, 945. The "Big Three" discussed plans for organizing a peace treaty with the United Nations when the war ended. It was at this time FDR began to have doubts about the Soviets and told Churchill to keep on top of Stalin, and to keep him posted if any changes took place. He headed to Warm Springs for a break from politics and to get the rest he needed. On April 12, 1945 he passed away from a cerebral hemorrhage. America was devastated they had lost their beloved President. Serving his country as President for more than twelve years, Franklin Delano Roosevelt was the only President to be elected four times and is still one of the most remembered US Presidents. He led the United States through its worst Depression and it's worst War, while trying to stay optimistic about the country and the decisions he made. He helped the American people regain faith in themselves and gave them the hope they needed throughout his twelve-year term as the 32nd President of the United States. ...read more.