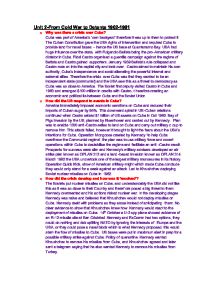 From Cold War to Detente 1962-1981 - Cuban crisis and international relations.

Unit 2-From Cold War to Detente 1962-1981 o Why was there a crisis over Cuba? Cuba was part of America's 'own backyard' therefore it was up to them to protect it. The Cuban Constitution gave the USA rights of intervention and required Cuba to provide land for naval bases - hence the US base at Guantanamo Bay. USA had huge influence over the state, with Fulgencio Batista being the pro-American military dictator in Cuba. Fidel Castro organised a guerrilla campaign against the regime of Batista and Castro gained supporters. January 1959 Batista's rule collapsed and Castro rode on into the capital city and took over. Castro aimed to maintain his own authority, Cuba's independence and avoid alienating the powerful internal and external allies. Therefore the crisis over Cuba was that they wanted to be an independent state (communist) and the USA saw this as a threat to democracy as Cuba was so close to America. The Soviet first deputy visited Castro in Cuba and 1960 and arranged $100 million in credits with Castro, therefore creating an economic and political tie between Cuba and the Soviet Union. ...read more.

Kennedy dealt with problems as they arose instead of anticipating them. No clear evidence to show that Khrushchev knew how Kennedy would react to the deployment of missiles on Cuba. 14th October a U-2 spy plane showed evidence of an R-12 missile site at San Cristobal. Kennedy and ExComm had two options, they could do nothing and risk splitting NATO by ignoring the interests of Europe and the USA, or they could pose a naval block which is what Kennedy proposed, this would stem the flow of missiles to Cuba. US bases were put in maximum alert in prep for a possible military strike against Cuba. Policy of quarantine. Kennedy wanted Khrushchev to remove his missiles from Cuba, and Khrushchev agreed and later sent a telegram saying that he also wanted Kennedy to remove his missiles from Turkey. o What impact did the crisis have on International relations? (1960's) International relations were flared up by the crisis and it was the closet they had ever come to a nuclear war. ...read more.

Relations improved even more with East Germany after Ulbricht resigned and was replaced with Erich Honecker, he made it possible to accommodate the idea of two separate German states. Dec 1972 the two Germanies signed an agreement formally recognising each other. o What did Ostpolitiks mean for Europe and International Relations? Berlin agreement September 1971, Soviets guaranteed Western access and the West German presence in Berlin was reduced. The Berlin agreement neutralised a continuing source of conflict between East and West and in doing so it helped to progress Ostpolitik. It also created a positive climate for American-Soviet detente. The Basic Treaty, December 1972, important development of Ostpolitik and relations between East and West. The treaty was an attempt to normalise relations between the two Germanies. First three articles of the Treaty were important politically, they were about the commitment to potential economic relations, the recognition of the sovereignty of the FRG and the GDR and their territorial 'inviolability'. It settled relations and provided the route for other European relations to establish relations with the GDR. By the end of September 1973 both the FRG and the GDR were members of the UN. The Helsinki Accords 1973-5, conference on security and cooperation in Europe. ...read more.