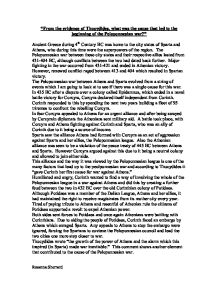 &quot;From the evidence of Thucydides, what was the cause that led to the beginning of the Peloponnesian war

"From the evidence of Thucydides, what was the cause that led to the beginning of the Peloponnesian war?" Ancient Greece during 4th Century BC was home to the city states of Sparta and Athens, who during this time were the superpowers of the region. The Peloponnesian war between these city states and their respective allies lasted from 431-404 BC, although conflicts between the two had dated back further. Major fighting in the war occurred from 431-421 and ended in Athenian victory. However, renewed conflict raged between 413 and 404 which resulted in Spartan victory. The Peloponnesian war between Athens and Sparta evolved from a string of events which I am going to look at to see if there was a single cause for this war. In 435 BC after a dispute over a colony called Epidamnus, which ended in a naval battle victory for Corcyra, Corcyra declared itself independent from Corinth. ...read more.

Both sides sent forces to Potidaea and once again Athenians were battling with Corinthians. Due to aiding the people of Potidaea, Corinth faced an embargo by Athens which enraged Sparta. Any appeals to Athens to stop the embargo were ignored, forcing the Spartans to coviene the Peloponnesian council and lead the two cities one more step closer to war. Thucydides wrote "the growth of the power of Athens and the alarm which this inspired (in Sparta) made war inevitable." This comment shows another element that contributed to the cause of the Peloponnesian war. After the Persian wars, there was a development of Athenian control when the Delian league was formed which was an alliance of cities based around Athens. Each city contributed funds to help maintain the vast navy but over time Athens dominated the Delian league and these "allied" cities came under direct Athenian control. The growth of Athenian empire was a considerable worry for Sparta due to Athenian navel power tightening its grip on neighbouring waters enclosing Sparta's peninsula. ...read more.

Overall when looking for a cause of the Peloponnesian war it is impossible to conclude that a one specific reason was to blame due to there being many different factors involved. These include cultural differences between Sparta and Athens, the growth of Athens Empire and the disputes over Epidamnus and Potidaea. However, in my pinion I think that the growth of Athens was on e of the main underlying causes because its growth was one of Sparta's greatest fears and it made the war inevitable. This was also the final judgement of Thucydides as he said "The Spartans voted that the treaty had been broken and that war should be declared not so much because they were influenced by the speeches of their allies as because they were afraid of the further growth of Athenian power, seeing, as they did, that already the greater part of Hellas was under the control of Athens." ?? ?? ?? ?? Rosanna Sherrard ...read more.