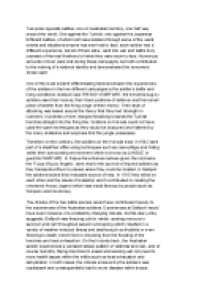 ﻿Two polar opposite battles, one on Australian territory, one half way around the world. One against the Turkish, one against the Japanese. Different battles, of which both saw soldiers through some of the worst events and situations anyone has ever had to face, each soldier had a different experience, but all of them alike, went into war and battle truly unaware of the real likelihood of what they were soon to face. Numerous amounts of men were lost during these campaigns, but both contributed to the making of a national identity and demonstrated the renowned Anzac spirit. One of the most evident differentiating factors between the experiences of the soldiers in the two different campaigns is the soldier?s battle and living conditions. Gallipoli was TRENCH WARFARE; the trenches dug by soldiers were their homes, their fixed positions of defence and their small piece of shelter from the firing range of their enemy. ...read more.

The climate of the two battle scenes would have contributed heavily to the experiences of the Australian soldiers. Experiences at Gallipoli would have been inclusive of a constantly changing climate. As this diary entry suggests, Gallipoli was freezing cold in winter, soaring mercury in summer and rain throughout autumn and spring which resulted in a variety of weather-induced illness and deaths such as frostbite or even freezing to death, trench foot or drowning from the flooding of the trenches and heat exhaustion. On the Kokoda track, the Australian soldier experienced a constant steady pattern of wetness and rain, and of course humidity. Being drenched in sweat and soaking wet only lead to more health issues within the militia such as heat exhaustion and dehydration. In both cases, the climate endured by the soldiers was unpleasant and consequentially lead to more disease within troops. As the Anzacs arrived at Anzac cove large daunting cliffs and unforgiving typography approached them. ...read more.

The flies and lice constantly pestered the soldiers and they very easily spread disease. When Australians soldiers entered the jungle of Papua New Guinea, mosquitoes added a whole new level of danger and were the biggest cause of disease and consequently death during Kokoda because they carried Malaria and Dengue fever. Many troops could not fight due to suffering from Malaria. The Flies contributed to the food going off in under 3 hours and helped spread diseases. The battle for Gallipoli in World War I gave Australians, as people, a chance to meet the world, and Australia as a unified nation to display to the globe her morals, her honour and affirm herself as a nation. The battle for Kokoda in World War 2 gave Australians a chance to save their country and represent themselves and their families in a war close to home. The experiences of the soldiers of these two campaigns would have been made up of sadness, sickness and mental scarring as well as disease, deaths and hardships and the true horrors of war. Gallipoli made Australia, Kokoda saved Australia. ...read more.