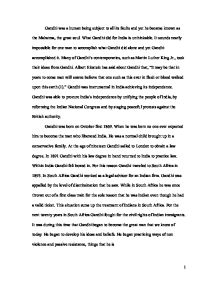 Gandhi was instrumental in India achieving its independence. Gandhi was able to procure Indias independence by unifying the people of India, by reforming the Indian National Congress and by staging peaceful protests against the British authority.

Gandhi was a human being subject to all its faults and yet he became known as the Mahatma, the great soul. What Gandhi did for India is unthinkable. It sounds nearly impossible for one man to accomplish what Gandhi did alone and yet Gandhi accomplished it. Many of Gandhi's contemporaries, such as Martin Luther King Jr., took their ideas from Gandhi. Albert Einstein has said about Gandhi that, "It may be that in years to come men will scarce believe that one such as this ever in flesh or blood walked upon this earth (1)." Gandhi was instrumental in India achieving its independence. Gandhi was able to procure India's independence by unifying the people of India, by reforming the Indian National Congress and by staging peaceful protests against the British authority. Gandhi was born on October first 1869. When he was born no one ever expected him to become the man who liberated India. He was a normal child brought up in a conservative family. At the age of nineteen Gandhi sailed to London to obtain a law degree. In 1891 Gandhi with his law degree in hand returned to India to practice law. Within India Gandhi felt boxed in. ...read more.

He harnessed the qualities and strengths of all to create an unstoppable force. This unification brought togetherness, efficiency, strength and the ability to work as one. Without all of the things that resulted in Gandhi's unification of his people it is very possible that India would not have achieved independence. Gandhi was able steer India in the direction of Indian independence by reforming the Indian National Congress to which he was elected in 1921. Before Gandhi was elected the Indian National congress had little appeal and was not able to accomplish much. Gandhi was able to breathe life into the Congress. When Gandhi was elected one of the first things he did was reach out to people living in remote areas. Gandhi had always thought that rural India was the backbone of the country and now he was able to fully utilize them (5). Gandhi opened new party branches in various areas. He made it easier for others to join by lowering the membership fee. Congress began to grow in popularity and membership multiplied. The party gained national dimension and a large following. From Gandhi's position he was able to spread his word quickly, what he said was highly respected. ...read more.

Throughout Gandhi's life he had three major fasts, one in autumn of 1924 to encourage nonviolence, one in September of 1932 for the conditions of the untouchables and one in September of 1947 to end Hindu Muslim violence. Each of Gandhi's fasts were meet with great results. For example, when Gandhi fasted for the untouchables he was able to get a representative for both the untouchables and the higher castes to meet and work out an agreement. These fasts used as protests kept Gandhi's people in line and in a state that was fit to fight the British. Everything Gandhi did was highly calculated and well thought out. His masterful leadership brought about the unification of this countries people, the reformation Indian National Congress and the peaceful protests leading to the freedom of India. Gandhi restored self respect within India. He showed his county what it could accomplish. Gandhi brought out the courage and strength within his people. Gandhi was revered by his country until his death on January 30, 1948. In a public announcement on that day Prime Minister Jawaharlal Nehru spoke these words, [Gandhi] represented the living truth, and the eternal man that was with us with his eternal truth reminding us of the right path, drawing us from error, taking this ancient country to freedom. (8) ?? ?? ?? ?? 1 ...read more.