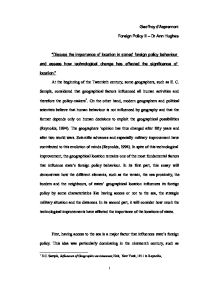 Geoffroy d'Aspremont Foreign Policy II - Dr Ann Hughes "Discuss the importance of location in states' foreign policy behaviour and assess how technological change has affected the significance of location." At the beginning of the Twentieth century, some geographers, such as E. C. Semple, considered that geographical factors influenced all human activities and therefore the policy-makers1. On the other hand, modern geographers and political scientists believe that human behaviour is not influenced by geography and that the former depends only on human decisions to exploit the geographical possibilities (Reynolds, 1994). The geographers 'opinion has thus changed after fifty years and after two world wars. Scientific advances and especially military improvement have contributed to this evolution of minds (Reynolds, 1994). In spite of this technological improvement, the geographical location remains one of the most fundamental factors that influence state's foreign policy behaviour. In its first part, this essay will demonstrate how the different elements, such as the terrain, the sea proximity, the borders and the neighbours, of states' geographical location influences its foreign policy by some characteristics like having access or not to the sea, the strategic military situation and the distances. In its second part, it will consider how much the technological improvements have affected the importance of the locations of states. ...read more.

Nevertheless the extent of their territory gave the USSR the possibility to spread resources, population and industry and so to be less vulnerable. In parallel, neighbours take part in an important role in states' foreign policy. The relations that a state has established with a more powerful neighbour are very different than a relationship with weak neighbours4: demands to territory, incursions, control over territorial assets, or favourable treaties can be used by the stronger one (Holsti, 1995). Take the case of Finland which, after the Second World War, was forced by the Soviet Union to stay neutral. Moreover, neighbouring some states can influence your relations with some others. Turkey was an important ally of the United States during the Cold War because of its position near the Soviet Union (in order to implant nuclear missiles targeting USSR) and near the Middle East (to control Oil). Thirdly, the distances play as well an important role in the foreign policy. On the one hand, the detachment from threatening countries permits a better security. For instance, the United-States are well positioned between two Oceans and friendly countries and, moreover, countries like Iraq and North Korea are far away. The only problem came from Cuba but after the Cuba missile5 crisis and the Collapse of the Soviet Union, this island is not a threat anymore. ...read more.

First of all, the most technological advances are developed by the richest countries and they do not share these. These countries have the strongest and the most equipped armies and can still take advantages of their particular locations. Moreover, a large gross national product per capita is needed to build up modern weapons or ABC (Atomic-Bacteriologic-Chemical) weapons, except of course in Iraq, Russia and China (Reynolds, 1994). Thus the same countries that can build these weapons are always the same. Next, nuclear weapons are above all deterrence and can be used today by a state's government. A Nuclear attack by the United States against rogue states should not be considered as likely. Moreover, a lot of countries possess the same kind of technologies. Lastly, one can contend that the impact of technological advances is neutralised by itself. For instance ICBM is neutralized by SDI and maybe SDI by new Russians missiles. In conclusion, technological advances have only slightly affected the importance of location in the foreign policy behaviour. It permits to strong states to diminish, to some extent, the disadvantages of their locations. As for weak states, they try to take advantage of their locations to fill their lack of technology. In spite of his modern army, the Soviet army was unable to destroy the resistance in the Mountainous Afghanistan. America can invade Iraq and Afghanistan with its advanced weapons but has neither shattered the Iraqis' resistance nor captured Bin-Laden. ...read more.