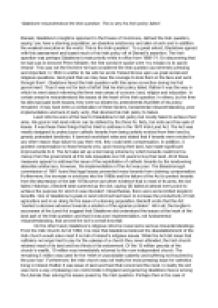 Gladstone misunderstood the Irish question. This is why his Irish policy failed. Discuss.

Furthermore, the increase in evictions into the 1880s and the failure of the Act to protect tenants from the depression of the late 1870s serve as further evidence that in most of its aims, the Act failed. Historian J Beckett best summed up the Act, saying ?[it] failed at almost every point to achieve the purpose for which it was intended?. Nevertheless, there were some limited longterm benefits. One of Gladstone?s goals in land reformed had been to increase the productivity of Irish agriculture and in so doing fix the issue of a starving population. Beckett wrote that the Act ?marked a decisive advance towards a solution of the agrarian problem?. All in all, the longterm successes of the Land Act suggest that Gladstone did understand the issues at the heart of the land part of the Irish question and that it was poor implementation, not fundamental misunderstanding, that proved the Act?s overall downfall. On the other hand, Gladstone?s religious reforms reveal some serious misunderstandings. From the Irish Church Act of 1869, it is clear that Gladstone believed the disestablishment of the Irish church would solve most if not all of Ireland?s religious issues. ...read more.

Non conformists were upset that it did make higher education secular. Protestants, with ant catholic feeling at an all time high following the Fenian uprisings and papal infallibility, refused to be forced together with catholics. In short, as Russell had done over thirty years previously, Gladstone completely and utterly failed to grasp the issues behind education in Ireland. He could not balance the incongruous demands of disparate groups in a single piece of legislation. As result of the Irish University Bill disaster, Gladstone offered his resignation, which was not accepted. This marked the end to his mission to pacify Ireland, brought about by legislation which demonstrated a clear lack of understanding. In conclusion, while Gladstone may have understood some of the issues behind the Irish question, he was unable to produce and pass legislation that comprehensively addressed these issues. Instead, his land reform was unenforceable, his religious reform self serving and his education reform incomprehensible. Evictions and rural unrest rose going into the 1880s, disestablishment did not effectively redistribute the church?s wealth and an agricultural depression increased Ireland?s food insecurity. For various reasons, chief among which was misunderstanding, Gladstone could not solve the issue of a starving population, alien church or absentee aristocracy. ...read more.