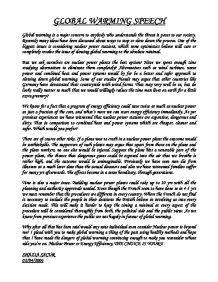 GLOBAL WARMING SPEECH Global warming is a major concern to anybody who understands the threat it poses to our society. Recently many ideas have been discussed

GLOBAL WARMING SPEECH Global warming is a major concern to anybody who understands the threat it poses to our society. Recently many ideas have been discussed about ways to stop or slow down the process. One of the biggest issues is considering nuclear power stations, which some optimistics believe will cure or completely resolve the issue of slowing global warming to the absolute minimal. But we ask ourselves are nuclear power plants the best option? Have we spent enough time studying alternatives to eliminate them completely? Alternatives such as wind turbines, wave power and combined heat and power systems would by far be a better and safer approach to slowing down global warming. ...read more.

As per previous experiences we have witnessed that nuclear power stations are expensive, dangerous and dirty. That in comparison to combined heat and power systems which are cheaper, cleaner and safer. Which would you prefer? There are of course other risks. If a plane was to crash in a nuclear power plant the outcome would be unthinkable. The supporters of such plants may argue that apart from those on the plane and the plant workers, no one else would be injured. Suppose the plane hits a venerable part of the power plant, the chance that dangerous gases could be exposed into the air that we breathe is rather high, and the outcome would be unimaginable. ...read more.

Where the French do not find it necessary to include the people in their decisions the British believe in involving us into every decision made. This will make it harder to keep the timing a minimal as every aspect of the procedure will be considered thoroughly from both, the political side and the public view. As we know from previous experience the public are not hugely in favour of global warming. Why after all that has been said would any sane individual even consider Nuclear power is beyond me? I plead with you to make global warming a thing of the past using healthy methods and hope that I have made the dangers of global warming convincing enough to make you reconsider whose side you're on. Nuclear Power or Energy Efficiency, THE CHOICE IS YOURS! SHAZIA SACUR 02/04/2006 ...read more.