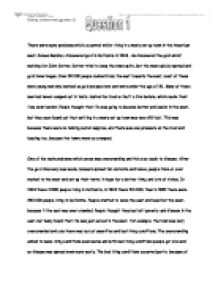 Gold and Cow towns - settling in the American West

There were many problems which occurred whilst living in a newly set up town in the American west. James Marshal, discovered gold in California in 1848. He discovered the gold whilst working for John Sutter. Sutter tried to keep the news quite, but the news quickly spread and gold fever began. Over 90 000 people rushed from the east towards the west, most of these were young men who worked as gold prospectors and were under the age of 30. Many of these men had never camped out in tents, hunted for food or built a fire before, which made their lives even harder. People thought that life was going to become better and easier in the west, but they soon found out that settling in a newly set up town was very difficult. This was because there were no running water supplies, and there was also pressure on the food and housing too, because the towns were so cramped. One of the main problems which arose was overcrowding and this also leads to disease. After the gold discovery was made, rumours spread far and wide and hence, people from all over rushed to the west and set up their tents; in hope for a better living and lots of riches. ...read more.

So, because the homes were not comfortable, the men were still living uncomfortably which caused frustration and also made it easier for disease to spread as they were living in an unclean home. As well as confined conditions and diseases spreading because of overcrowding, what made this worse was that there was now pressure on water supplies, food and housing. People left the east as it was too cramped and also to get rich, now the west was overcrowded too. The organisations of proper public health systems, where people have access to piped water and safe sewage disposal; is usually the responsibility of local government. Without the local government to organise this, water supplies were basic- adding to the public health problems. They added to the public health problems because as there was no piped water people had to get drinking water from rivers, which was where they disposed sewage too. So, the rivers were polluted and people still had to drink from them; this lead to disease. Another problem was the loneliness of the miners which drove them to the prostitutes and bars, and then the bar owners and shopkeepers charged extremely high prices for goods; for example, a pair of shoes would cost $8 in California and $75 in New York. ...read more.

Another problem was that only rich companies who were already rich became richer. As the mining companies only employed miners who were living in rough conditions they then paid them very little wages. So there was no change for the newly set up people. Also an added problem was that no law and order systems had been set up so people took into their own hands and that is how lynching came about. Because of the r****m foreign miners were taxed more and what worsened it even more for them was the exploitation. Bar owners and shopkeepers new that the miners would have no choice but to pay so they charged extremely high prices. Then because of all the drinking and frustration the miners were also lonely so they went to the prostitutes, who also charged high prices. With all these highly charged prices the miners were also paid very little. The mining companies only employed miners in rough conditions so they could get very poorly paid and the mining companies got even richer and ordinary people didn't. So life became difficult because of low pay which also caused poor living conditions. So therefore I think living in newly set up town in the west made life worse and harder for most of the newly set up people in the west, however, there were a very few people who's life did change for the better. Sidra Hafeez 10L History coursework (question 1) ...read more.