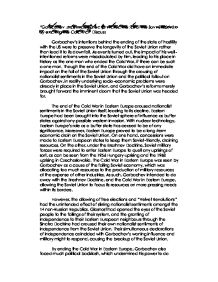 Glasnost had opened the eyes of the Soviet people to the failings of their system, and the granting of independence to their Eastern European neighbours through the Sinatra Doctrine had aroused their own nationalist sentiments of independence from the Soviet Union. Their simultaneous declarations of independence coincided with Gorbachev's waning influence and military might to respond, causing the breakup of the Soviet Union. By ending the Cold War in Eastern Europe, Gorbachev also faced much political backlash, which undermined his power to do anything to stop the breakup of the Soviet Union. Gorbachev effectively lost his entire supporter base with his policies of reform, both among the conservatives and reformists. Stopping direct Soviet intervention in Eastern Europe, granting free elections, and encouraging Glasnost, amongst other actions, hurt his standing with the conservatives, as they were unhappy with the loss of the Soviet Union's status as a superpower. The reformers were unhappy with Gorbachev towards the end of his term as party chief, at what they deemed were half-hearted reforms in the Baltic States and his self-appointment as Executive President. ...read more.