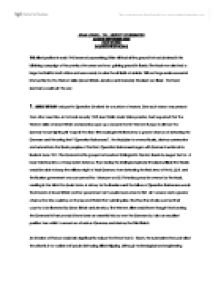 GREAT BRITAIN took part in Operation Overlord for a number of reasons. One such reason was pressure from other countries. As far

ADAM JOHNS - 11H - HISTORY COURSEWORK AUGUST/SEPTEMBER 2005 2342 WORDS DOUBLE LINE SPACING THE Allied position in early 1942 seemed unpromising. Hitler still had all the ground he had obtained in his blitzkrieg campaign of the previous five years and was gaining ground in Russia. The Nazis now also had a large foothold in North Africa and were ready to seize the oil fields of Arabia. Without large scale successful intervention by the Western Allies (Great Britain, America and Canada) it looked very likely that Nazi Germany would win the war. 1. GREAT BRITAIN took part in Operation Overlord for a number of reasons. One such reason was pressure from other countries. As far back as early 1942 Josef Stalin, Soviet Union premier, had requested that the Western Allies of Great Britain and America open up a second front in Western Europe to distract the German forces fighting his troops in the East. This would give his Red Army a greater chance of defeating the Germans and thwarting their "Operation Barbarossa", the Nazi plan to overrun Russia, destroy communism and exterminate the Slavic peoples of the East. Operation Barbarossa began with German insertions into Russia in June 1941. The German battle groups had reached Stalingrad in Western Russia by August but had been held back by a strong Soviet defence. Even during the Stalingrad episode it looked unlikely that Russia would be able to keep the military might of Nazi Germany from defeating the Red Army of the U.S.S.R. and the Russian government was concerned that Moscow and St. Petersburg may be overrun by the Nazis, resulting in the fall of the Soviet state. A victory for the Russians and the failure of Operation Barbarossa was in the interests of Great Britain and her government as it would mean a loss for Britain's enemy and a greater chance that she could be on the Second World War's winning side. ...read more.

During 1944 at least 20,000 railway trains carried men and gear to the south coast assembly points where soldiers were based for the final few days to prepare for their mission into France. They would leave from 24 embarkation points in counties such as Hampshire and Dorset. To add to the manpower freshly drafted in from America and the replenished British Army groups that had fought in France four years before, men were withdrawn from actions in Italy and the Pacific and from bases around the empire. Before the invasion several mock invasions took place to train Allied troops for the invasion. The most notable of these was one that took place at Slapton Sands, an area of coastline on the English south coast, where United States vessels rehearsing for Operation Overlord were detected and attacked by vessels of the Kriegsmarine. As a result of this when Overlord itself took place German radar stations in the French North were blocked to prevent a pre-emptive German attack on an invasion fleet. It was realised early in planning for Overlord that the Nazis would have to be deceived into making errors in their defences if the invasion was to be successful. One way in which the Germans were fooled was through the targeted bombing of France. For every tonne of bombs that was dropped on Normandy, the more important target, two were dropped on the area around Calais. The object of this was to make Nazi commanders think that an invasion would land at Calais not Normandy. This was also attempted by Spanish double agent 'Garbo'. Garbo was a spy for Great Britain masquerading as a spy for the Nazis. Garbo specialised in communicating misinformation to the Nazis. Most importantly he made German commanders believe that an attack was planned for Pays-de-Calais when it was actually due to take place in Normandy. He also gave cause for the Nazis to believe an invasion was due days later than it actually was. ...read more.

The failure to take Caen for weeks following the invasion was a problem as the plans for Normandy were partly based on Caen being taken by the British within one or two days of the first attack. This meant that battle plans had to be changed and units committed to fighting for Caen where they wouldn't have otherwise. The Allies managed to capture Port-en-Bessin which meant that British and Canadian troops could meet with the American forces and move inland in a more unified fashion. The problems in Normandy after the initial victories on the beaches were caused by the British, Canadian and American inability to advance quickly through the farmland south of the beaches. Troops became trapped for too long by German resistance and fields punctuated with dense hedges. Despite these problems the invasion force managed to breach German defences time after time and by August they had liberated Paris and pushed the Nazis into eastern France. I think the invasion of Europe in Operation Overlord was a definite success. Overlord provided the Western Allies with the ground in France they so desperately needed for a victory in the war. Without liberating the nations of Western Europe winning the war and ridding the world of Nazism was not a possibility. The entry into France was the only way that such countries could be liberated and the only way that Germany could be reached. Despite the loss of lives in the battles for ground in Europe I think it should be regarded as a success. The only possible way that Nazi Germany could be defeated was through war and death is an inevitable part of every large war. Operation Overlord provided a entry point for the Allies as part of their campaign to return the world to relative normalcy. Had this not happened it is very possible that the Nazis would have won the war and many more than were killed in Normandy would have been killed in the nations of the West. ?? ?? ?? ?? ...read more.