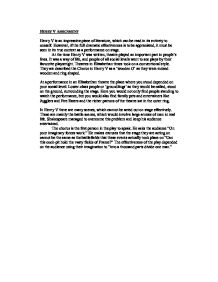 HENRY V ASSIGNMENT Henry V is an impressive piece of literature, which can be read in its entirety to oneself. However, if the full dramatic effectiveness is to be appreciated, it must be seen in its true context as a performance on stage. At the time Henry V was written, theatre played an important part in people's lives. It was a way of life, and people of all social levels went to see plays by their favourite playwright. Theatres in Elizabethan times took on a conventional style. They are described the Chorus in Henry V as a 'wooden O' as they were indeed wooden and ring shaped. At a performance in an Elizabethan theatre the place where you stood depended on your social level. Lower-class people or 'groundlings' as they would be called, stood on the ground, surrounding the stage. Here you would not only find people standing to watch the performance, but you would also find family pets and entertainers like Jugglers and Fire Eaters and the richer patrons of the theatre sat in the outer ring. In Henry V there are many scenes, which cannot be acted out on stage effectively. These are mainly the battle scenes, which would involve large armies of men in real life. Shakespeare managed to overcome this problem and keep his audience entertained. The chorus is the first person in the play to speak. He asks the audience "On your imaginary forces work." He makes excuses that the stage they are acting on cannot be the same as the battlefields that these events actually took place on "Can this c**k-pit hold the vasty fields of France?" ...read more.

So therefore we did not learn whether Henry is a good Christian king from the French but we did learn that he is powerful and not so weak as to be rejected as an easy victory. There is another instance where the two countries meet. The Dauphin meets with him earlier in the play and then reports back to King Charles. He tells the king HENRY IS "THE MIRROR OF ALL CHRISTIAN KINGS," HOW DOES SHAKESPEARE BUILD UP HIS CHARACTER TO SUGGEST THIS AND WHY? that England is ruled by a "vain, giddy, shallow, humorous youth." and that because of this, they have no fear of going to war. King Charles then tells his princes and knights to beware of Henry, because he doesn't want France to live its past history again. "And he is bred out of that b****y strain that haunted us in our familiar paths. Witness our too-much memorable shame when Cr�cy battle fatally struck," King Charles, Act 2, Scene 4, Lines 51-54. The person who I felt told us the most about Henry's character was Henry himself. One of the first serious actions we see him take is against the three traitors, Richard, Earl of Cambridge, Henry, Lord Scrope of Masham and Thomas Grey, Knight of Northumberland. Their plan was to kill Henry at Southampton before he departed for France. Henry caught wind of this but didn't straight away order them to be executed for high treason. We see Henry tell the three traitors that a man had been arrested for shouting abuse at him whilst drunk, he then asks them what they think the punishment should be. ...read more.

His speech is enough to make any reader feel patriotic, as it did me and shows that he is a good king, who does not always think of himself as a king. So Shakespeare creates an almost perfect character in this play. Henry is, calm under pressure and doesn't always regard himself as above all the rest. He can be aggressive when needed but always thinks before he is. He is also certain that he is just a human being, not a God like person who is greater than everyone else, and this shows when he is going in to battle with his soldiers. It is then when his true character comes out, a patriotic person with spirit for his friends. Although Shakespeare has made an almost perfect character, he couldn't have made Henry so perfect that he wasn't realistic. Therefore Shakespeare makes Henry have a few weaknesses, one of these weaknesses is when Bardolph, an old friend of Henry steals a pax from a church. Henry has to stand up to his power as a King and hangs Bardolph for his crime. Henry is the "The Mirror of all Christian kings"; I would find this a true statement. He is a King who should be looked up to and respected for his good qualities. He should also be respected even for his bad qualities, because everyone has a flaw but it doesn't mean that they are a bad person. Whilst he is a good Christian King, he is also a good Christian person. He is kind, forgiving and calm under pressure and when needed. ...read more.