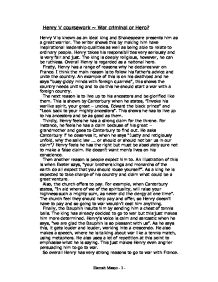 Henry V coursework ~ War criminal or Hero? Henry V is known as an ideal king and Shakespeare presents him as a great warrior. The writer shows this by making him have inspirational leadership qualities as well as being able to relate to ordinary people. Henry takes his responsibilities very seriously and is very fair and just. The king is deeply religious, however, he can be ruthless. Overall Henry is regarded as a national hero. Firstly, Henry has a range of reasons why he declares war on France. I think the main reason is to follow his father's advice and unite the country. An example of this is on his deathbed and he says "busy giddy minds with foreign quarrels", this shows the country needs uniting and to do this he should start a war with a foreign country. The next reason is to live up to his ancestors and be glorified like them. This is shown by Canterbury when he states, "Invoke his warlike spirit, your great - uncles, Edward the black prince" and "Look back to your mighty ancestors". This shows he has to live up to his ancestors and be as good as them. Thirdly, Henry feels he has a strong claim for the throne. For instance, he feels he has a claim because of his great - grandmother and goes to Canterbury to find out. ...read more.

It is also shown in Henrys speeches. In the speech, Harfleur, Henry gives the men something to fight for as he talks to them as though they are all equal and making them remember there fathers to fight as good as them. The king tells them they will all become role models for people who haven't got courage. Henry is expressing his confidence in them. Henry uses similes like greyhounds are hunting the enemies, which is what the soldiers are doing to the French. Henry right at the end shouts a battle cry, which inspires the men even more. Overall Henry was trying to make them feel good about themselves and not like bad war warriors. In the speech, Agincourt, Henry uses the same techniques in the Harfleur speech. Henry uses a public display of confidence to boost their courage. Henry tells his soldiers that they will get a lot of glory and that they will be remembered. He tells them they are all equal and that they will all bond together. Henry in his speech is not forcing them to do anything they don't want. Henry tells them they are very special. Henry works the speech into a crescendo, getting louder and louder, making the men get more positive as it goes on. This does the same effect as the Harfleur speeches making the men want to fight. ...read more.

All Henry is basically doing is working on their imagination. This is not controversial to Henrys' contemporaries as his first responsibilities are to his own soldiers. Another controversial thing Henry has done is the killing of all the French prisoners, which would have been classed as a war crime today but not in Henrys time. Henry loses his temper and does this out of revenge but I feel this is justified because the French went against the law and killed all the young boys who would of only been armed with a pen knife. This was wrong and the French deserved what they got. It was also a very responsible thing to do as there are not enough soldiers to guard the prisoners and to go into battle as the English are still out numbered five to one, so really it is an important decision to make. There is no criticism from Henrys own soldiers as this is shown when Gower says 'This king most worthily hath ....... Oh, 'tis a gallant king!' They think Henry has not really committed a crime as the French started it and he was only retaliating. Although I considered the facts about Henry, I don't feel he committed a crime. Hence I think Henry is not a war criminal but hero as he only does controversial things to help his country and he takes his responsibilities seriously. ?? ?? ?? ?? Hannah Mason - 1 - ...read more.