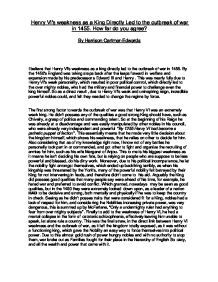 Henry VI's weakness as a King Directly Led to the outbreak of war in 1455.

for the throne, and was then executed for treason, to which Richard of York must have hated Henry VI for. However this was another generation, and wouldn't have been Richard's main grudge against Henry VI, but unfortunately for Henry, during his reign he angered Richard of York several times. For example in 1447 Richard of York was removed from the Normandy Command and sent to Ireland, which was an act by Henry VI to suppress Richard. Furthermore Richard of York's old position of Command in Normandy was given to his arch-rival, Duke of Somerset, which on top of the humiliation of losing his post in France, was a cruel final slap in the face for Richard. What must have killed him most of all was the denial to come to the aid of Normandy under the Command of Somerset, which as a result fell into French hands. So the King denied him the ability to save the land where he had help secure and keep safe for many years. Due to Richard's increasing resentment towards the Henry VI, the King tried to satisfy/pacify York for good, by giving him the Welsh Marshes. This backfire astronomically, as due to its location being far away from Westminster, fewer feudal taxes were collected, which allowed Richard of York's profits to soar, effectively making him the second wealthiest man in England. ...read more.

So due to this loss of valuable territory, it shook the faith towards the King, which may have been the reason towards the inclination, to go against the crown in the wars to come. The whole Loss of Normandy can be put on Henry VI, considering he hired weak military generals, and didn't fund the forces and defences properly, instead spending a large portion of money on funding Eton College, leaving the French boarders weak and vulnerable. To conclude, considering the four factors, it is crystal clear that Henry VI weakness as a King directly led to the outbreak of war in 1455. He was unable to understand politics, military priorities and the nations finance, and as a result spelt the beginning of the end of his reign. He put England into consistent decline, with the loss of Normandy, huge economic debt to "Overmighty Nobles" who as a result came back to bite him and allowing feuds among the Nobility without intervention, this all combines gave reason towards the outbreak of war in 1455 as the military powerful Nobles lost all faith in their King, and had the resources to do something about it, war. "The wars occurred in the circumstances created by Henry's mental incapacity" ...read more.