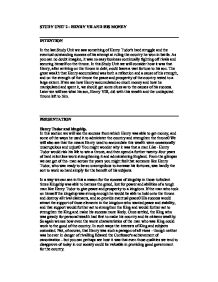 Henry VII and His Money.

STUDY UNIT 2 - HENRY VII AND HIS MONEY INTENTION In the last Study Unit we saw something of Henry Tudor's hard struggle and the eventual outstanding success of his attempt at ruling the country he won in battle. As you can no doubt imagine, it was no easy business continually fighting off rivals and securing himself on the throne. In this Study Unit we will consider how it was that Henry, after arriving on the throne in debt, could leave a vast fortune to his son. The great wealth that Henry accumulated was both a reflection and a cause of his strength, and on the strength of the throne the peace and prosperity of the country rested to a large extent. If we see how Henry accumulated so much money and how he manipulated and spent it, we should get some clues as to the causes of his success. Later we will see what his son, Henry VIII, did with this wealth and the undisputed throne left to him. PRESENTATION Henry Tudor and kingship. In this section we will see the sources from which Henry was able to get-money, and some of the ways he used it to administer the country and strengthen the throne0 We will also see that the means Henry used to accumulate this wealth were occasionally unscrupulous and unjust0 You might wonder why it was that a man Like- Henry Tudor would risk his life to win a throne, and then spend a further twenty-four years of hard relentless work strengthening it and administering England. From the glimpse we can get of the- man across the years you might feel that someone like Henry Tudor, who was ready to be so unscrupulous to increase his fortunes, was hardly the sort to work so hard simply for the benefit of his subjects. In a way we can see in this a reason for the success of kingship in those turbulent times Kingship was able to harness the greed, l**t for power and abilities of a tough man like Henry Tudor to give peace and prosperity to a kingdom. ...read more.

In 1491 he got about �3,700 from land and about �25,000 by the end of his reign. Much of the land regained by the King, and much of the money which reached his treasuries, came from doubtful sources. 8omeof his servants were a little too zealous in their master's cause., not that Henry ever seemed to discourage them, and many became wealthy themselves on what they made on the side. Empson and Dudley were two of the most notorious and generally hated. They screwed the last penny out of their chosen victims by stretching the law to its Limits, and occasionally beyond. While they remained under the protection of Henry they were untouchable, but paid for their overzealous services under his son, who won easy popularity at the opening of his reign by having- them- executed for extortion. "Feudal incidents". Another group of revenues which Kings of England could claim was that collection of right which came under the heading of "feudal incidents". Some of these dated back to the early years of the Norman Conquest and to Magna Carta, In certain cases the reasons for their existence had long since disappeared though such an objection wasno deterrent to Henry. For example, he vigorously claimed and collected the ancient tax which fell due on the knighting of the King's eldest son, even though his son Arthur was already dead when he collected the money. During the Middle Ages the Kings as feudal overlord was owed various duties by his tenants-in-chief in return for their lands. On the death of a subject who held land as a knight, the heir who wished to inherit the land had to pay a sum of money to the king, his overlord. This was known as 'relief', If there was no heir the land would revert to the King by the process of 'escheat'. Henry drew a constant revenue from relief payments, though he rarely benefited much from escheats. ...read more.

Henry wanted a more efficient system to be able to manipulate his finances more quickly and effectively, so, like other strong Kings before him, he built up another- financial office, called the Chamber. During his reign, by a variety of methods, he channelled more and more business through this Chamber and away from the Exchequer. The Chamber used more modern bookkeeping techniques and Henry kept it under close control; so close in fact that his detailed personal supervision can still be seen from the constant stamp of his personal cypher on nearly every page of the account books. By the end of his reign more than four-fifths of all royal revenues passed through the Chamber. Parliament. For particular threats to the country or throne Henry could always turn to Parliament for "extraordinary" grants of money. Parliament met to give authority to the policy of the government and - because the Commons represented the groups who would be responsible for implementing whatever laws were made - they offered some sort of guarantee that the government policy would in fact be put into effect around the country. Parliament also authorized the collection of taxes around the country. Henry VII asked for only five grants in the twenty-four years of his reign. As he grew richer he hardly called Parliament at all: during the second half of his reign only once, in 1504, to get money for his expedition against France, War. Henry was reluctant to become involved in war - that great eater of money - unless he felt confident it would bring profit. His entry into France with an army in 1496 was so calculated that the king of France was immediately ready to buy him off, and at Etapies agreed to a large immediate payment and a 'pension' of �5,000 per annum. So by avoiding war and cultivating as completely as possible all the sources of revenue available to him, Henry built the English throne up from something battered and cheapened by Internal struggle to the firmest and wealthiest in Europe. ...read more.