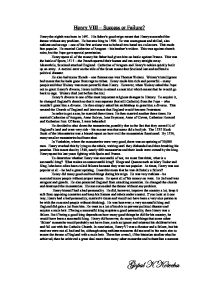 Henry VIII - Success or Failure? Henry the eighth was born in 1491. His father's good reign meant that Henry succeeded the throne without any problem. He became king in 1509. He was courageous and skilled, also ruthless and savage - one of his first actions was to behead two hated tax collectors. This made him popular. He married Catherine of Aragorn - his brother's widow. This was against church rules, but the Pope gave special permission. Henry spent all of the money his father had given him on battle against France. This was the battle of Spurs, 1513 - the French spurred their horses and ran away straight away. Meanwhile, Scotland attacked England. Catherine of Aragorn and Henry's nobles quickly built up an army. A tactical error on the side of the Scots meant that Scotland lost and suffered a political disaster. ...read more.

He married Catherine of Aragorn, Anne Boleyn, Jane Seymour, Anne of Cleves, Catherine Howard and Katherine Parr. Of these, 2 were beheaded. He decided to shut down the monasteries, possibly due to the fact that they owned 1/4 of England's land and were very rich - his excuse was that some did a bad job. The 1535 Black Book of the Monasteries was a biased report on how well the monasteries functioned. By 1536, many smaller monasteries had been shut. In Yorkshire, where the monasteries were very good, there was an uprising of 30,000 men. Henry crushed this by lying to the rebels, waiting until they disbanded and then breaking his promise. This meant that by 1540, nearly 400 monasteries and their lands were owned by the king. Henry spent his last years fighting with Spain and France. ...read more.

He was however; a very successful king and England did gain a lot from him. He went to a lot of trouble to prevent political disaster and acquire a male heir. If being a successful king requires a good personality, then Henry was a failure. But if being a good king depends on how many good things he did for his country, he would have been a successful king. Henry did however, do many bad things that some other 'failure' monarchs would probably not have done, such as ignore and mistreat his children/wives and fall out with the Catholic Church. In conclusion, Henry VI was a dictator and a failure, but his motives were not all bad and he, although using ruthless measures did succeed in his main aim to secure the throne of England with a male heir. Therefore overall, if the historian studies what he achieved, then he achieved a great deal more than many other monarchs and is therefore a success. Gopal K Kotecha ...read more.