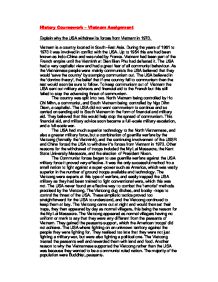 History Coursework - Vietnam Assignment Explain why the USA withdrew its forces from Vietnam in 1973. Vietnam is a country located in South-East Asia. During the years of 1961 to 1973 it was involved in conflict with the USA. Up to 1954 this are had been known as Indo-China and was ruled by France. Vietnam had been part of the French empire until the Vietminh at Dien Bien Phu had defeated it. The USA had a very capitalist view and had a great fear of all communist behaviour. As the Vietnamese people were mainly communists the USA believed that they would 'save the country' by stamping communism out. The USA believed in the 'domino theory', the belief that if one country fell to communism then the rest would soon be sure to follow. To keep communism out of Vietnam the USA sent out military advisors and financial aid to the French but this still failed to stop the advancing threat of communism. The country was split into two. North Vietnam being controlled by Ho Chi Mihn, a communist, and South Vietnam being controlled by Ngo Dihn Diem, a capitalist. The USA did not want communism to continue and so carried on sending aid to South Vietnam in the form of financial and military aid. ...read more.

They realised too late that they were not just fighting a military war, but were also fighting a political one. The Vietcong treated the peasants well and rewarded them with land and food. Another reason to why the Vietnamese supported the Vietcong rather than the USA was because they wanted to be a communist ruled nation. The majority of the population were Buddhist, peasants. The Vietnamese people were horrified by the damage caused by the American troops. Their response to the Vietcong's tactics were air strikes killing thousands of innocent civilians. This overpowering reaction caused the North Vietnamese to be more determined to resist against the USA. The conventional warfare that the US used was not effective against these tactics used by the Vietcong. It did not protect them from the basic dangers of punji stakes or pit falls. The USA began to use chemical warfare such as Napalm, and Agent Orange. These were used to strip the jungle of vegetation, but caused much more human distress. Also 'search and destroy' missions were introduced. The world media did not approve, and quickly turned the world against this war, and the reasoning's behind it. ...read more.

The soldiers fighting in the war had very little interest in it and did not fully understand themselves why they were fighting it. All they wanted to do was serve their 12 months of duty and then go home back to their lives. This was very different to why the Vietnamese were fighting. They were fighting to keep a way of life and have freedom in their own country, and also to stay alive. President Johnson was soon voted out, and so was his policy for war in Vietnam. President Nixon was elected as The USA's new president, and brought the USA out of war. In 1973 troops were withdrawn from Vietnam. The loss of the war was blamed upon the military advisors and government. But really what had lost the war was the lack of reasoning behind it in the first case. The only reason behind it was that the 'threat' of communism nearly four thousand miles away from their country. Their fear of this small threat was the reason that the USA failed in Vietnam. Their 'domino theory' was only a fear to the government and not the public. The insignificant threat to their superpower drove them to war, and drove them to failure. ...read more.