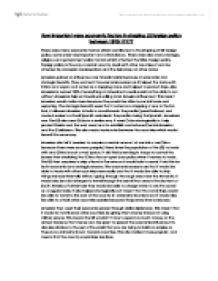 How important were economic factors in shaping US foreign policy between 1890-1917? There were many economic factors which contributed to the shaping of US foreign policy, some were very important and others less so. There were also many strategic, religious and government policy factors which affected the USAs foreign policy. Foreign policy is the way a certain country deals with other countries, it can be affected by domestic considerations and the behaviour of other states. America gained an influence over Hawaii mainly because of economic and strategic benefits. They wanted it for economic reasons as it helped the trade with China and Japan as it acted as a stepping stone and helped to protect ships. Also Americans owned 75% of everything on Hawaii so Hawaii would not be able to run without Americas help so Hawaii was willing to let America influence it. ...read more.

The US then acquired a strip of land in Panama so it could build a canal. It did this for both economic and strategic reasons. The economic reasons are that it would be able to trade with other countries more easily and that it would be able to ship things transcontinentally without going through the rough seas near the Antarctic. It would also be a lot cheaper to travel through the canal than around the bottom of South America. Furthermore they would be able to charge states to use the canal on a regular basis. It also helped strategically as it meant that the naval ships would be able to travel to the east of the country in defensive situations and it would also be able to attack other countries quicker because the journey time is reduced. America then used their economic power through dollar diplomacy. ...read more.

However this can also be seen as an economic factor as Roosevelt only said this to protect the interests of American businesses. Woodrow Wilson was then influenced by economic factors when deciding whether to go to war or not. At first he decided not to go because it would be very expensive and would stop America from concentrating on its own economy. But he then decided to go to war because if they didn't then the US would lose billions of dollars which they had lent to the allies as if the allies lost they would be broke and would not be able to repay debts. Also the American economy would benefit because of all of the munitions that were being manufactured in America and would be sold to the government. Altogether I think the economic factors were the biggest influence in shaping American foreign policy as most of Americas diplomacy depended on money. Although there were other factors that shaped foreign policy like strategy, politics and culture none of these were deemed to be as important to the American government. ...read more.