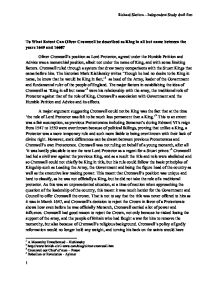 To What Extent Can Oliver Cromwell be described as King in all but name between the years 1649 and 1660? Oliver Cromwell's position as Lord Protector, agreed under the Humble Petition and Advice was a monarchial position, albeit not under the name of King, and with some limiting factors. Cromwell ruled through a system that drew many comparisons with the Stuart Kings that came before him. The historian Mark Kishlansky writes 'Though he had no desire to be King in name, he knew that he would be King in fact,'1 as head of the Army, leader of the Government and fundamental ruler of the people of England. The major factors in establishing the idea of Cromwell as 'King in all but name'2 were his relationship with the army, the traditional role of Protector against that of the role of King, Cromwell's association with Government and the Humble Petition and Advice and its effects. A major argument suggesting Cromwell could not be King was the fact that at the time 'the role of Lord Protector was felt to be much less permanent than a King.'3 This to an extent was a fair assumption, as previous Protectorates including Somerset's during Edward VI's reign from 1547 to 1550 were overthrown because of political failings, proving that unlike a ...read more.

even if Cromwell was not King in name, he had earned his position and the title was not as important in his position as ruler of all England. A direct comparison between Oliver Cromwell and King Charles I show an almost identical role. Both had the right to name their successor, both had the money to run the country as they saw fit, both had an army that was sworn to serve them. Cromwell, just as Charles had previously, 'was to be known as His Highness.'12 Cromwell was even treated slightly better than Charles in some ways, for example his funeral 'where he was buried in Westminster abbey in a ceremony based off King James II,'13 although this was mainly due to the fact that at the end of his reign Charles was regarded as a traitor and his execution was a public show of this. Interestingly after his death and the re-establishment of the monarchy, Cromwell himself was dug up and executed as a sign that his revolutionary era was over. Cromwell even went so far as to describe Charles as 'The grand author of our troubles, responsible for the bloodshed of the Civil Wars.'14 Perhaps the most important ceremony of a monarchs reign is their coronation, where again many parallels can be drawn between Cromwell's and previous monarchs. ...read more.

After-all 'the scene in which Cromwell formally accepted the title of Lord Protector was as serious, as ritualized as anything seen in the age of Kings. '23 The title Lord Protector was proven to be as meaningful as King, Cromwell proved himself as the rightful claimant of the throne and he had an army that was loyal to him, as a person and as a ruler. The poor reputation and connotations of the word King meant he did not use it, even though he was effectively doing the same role by leading the army, heading up the Council and using his power to establish a parliament that worked. On an even simpler note a true show of Cromwell's power and influence over the country was that he himself dictated the terms under which he would rule. In 1899 a statue of Oliver Cromwell was erected outside the palace of Westminster, alongside every other English monarch. Interestingly this suggests that 250 years after his death, Cromwell was finally accepted by parliament as one of the English Monarchs. He was and still is recognized both countrywide and worldwide as leader, and although he was not a King in name, every other part of his leadership embodied the nature of a King. For these reasons Cromwell was not just a stop-gap between Stuart Monarchs, but a King in his own right. ...read more.