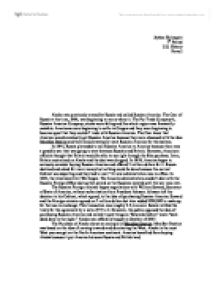 Jaybee Holmquist 7th Period U.S. History Powell Alaska was previously owned by Russia and called Russian America. The Czar of Russia at the time, 1866, was beginning to worry about it. The Fur Trade Company's, Russian America Company, stocks were failing and the whole region was financially unstable. Americans were beginning to settle in Oregon and they were beginning to become upset that they couldn't trade with Russian America. The Czar knew that America would eventually get Russian America because they were obsessed with the idea Manifest Destiny and they would eventually want Russian America for themselves. In 1845, Russia pretended to sell Russian America to America because there was a possible war that was going to start between Russian and Britain. However, American officials thought that Britain would be able to see right through the fake purchase. Later, Britain neutralized on Alaska and the deal was dropped. In 1859, America began to seriously consider buying Russian America and offered 5 million dollars for it. Russia declined and asked for more money but nothing could be done because the current Cabinet was departing and they had to wait 'till new administration was in office. In 1861, the American Civil War began. ...read more.

Many took ships from Seattle, Washington but some ships sank along the way. Many people were unemployed due to the Panics of 1893 & 1896 and wanted to get rich quick. Gold was scarce in circulation at the time. Some people even left respectable professions as a doctor or a teacher. Most knew that finding large amounts of gold to make them rich would be nearly impossible but still made the journey. When people did get there the advertisements of "gold for the taking" were grossly exaggerated and most locals had already claimed gold bearing creeks. An upside of going to Alaska was that large companies bought out land, brought in drag lines, hydraulic equipment and hired people to mine for them which provided many jobs for people in that region. A fun fact is that people came from all over such as South Africa, the UK and Australia. The Gold Rush provided Growth & Change for the United States because during this period many more people were beginning to settle in Alaska and Alaska's population doubled. The Gold Rush also provided Alaska with Diversity. The Gold Rush brought people from all walks of life to Alaska. ...read more.

It was to be from Dawson Creek, British Columbia to Delta Junction, Alaska. It was planned to connect it with pre-existing highways in Alaska and in Britsh Columbia, which it was. It was built in eight and a half months and it was built as a military supply route. It was the first direct connection between Alaska and the rest of America. The Alcan Highway is an example of Growth & Change for Alaska. It was the first highway connecting Alaska and the rest of America so America began growing to expand its forms of transportation to the state. It was growing in a way that through this highway news, supplies and other things could be transported to Alaska quicker than before, potentially allowing Alaska to grow and expand itself. In the development of Alaska, Alaska wasn't a state until 92 years after it was bought. Alaska became an American Territory in 1912. It wasn't made a state because Legislators argued that the population in Alaska was too small and that the economy was too unstable to be included within the rest of the states. However, some argued that Alaska has some strategic advantages as showed during World War II. President Dwight D. Eisenhower signed the Alaska Statehood Act into U.S. law in July 1958. The following year in January, 1959, Alaska was admitted into the Union. ...read more.