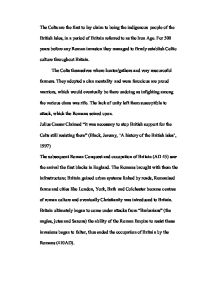 The Celts are the first to lay claim to being the indigenous people of the British Isles, in a period of Britain referred to as the Iron Age. For 500 years before any Roman invasion they managed to firmly establish Celtic culture throughout Britain. The Celts themselves where hunter/gathers and very resourceful farmers. They adopted a clan mentality and were ferocious are proud warriors, which would eventually be there undoing as infighting among the various clans was rife. The lack of unity left them susceptible to attack, which the Romans seized upon. Julius Caesar Claimed "it was necessary to stop British support for the Celts still resisting there" (Black, Jeremy, 'A history of the British isles', 1997) The subsequent Roman Conquest and occupation of Britain (AD 43) saw the arrival the first blacks in England. The Romans brought with them the infrastructure; Britain gained urban systems linked by roads, Romanised farms and cities like London, York, Bath and Colchester became centres of roman culture and eventually Christianity was introduced to Britain. Britain ultimately began to come under attacks from "Barbarians" (the angles, jutes and Saxons) the ability of the Roman Empire to resist these invasions began to falter, thus ended the occupation of Britain by the Romans (410AD). It remains unclear why the "Barbarians" came to Britain. It may be down to their inability to crow crops, due to recurring flooding in their native homelands, nevertheless Britain was eventually conquered. Much of Roman Britain fell into ruin, the culture of the Romans was lost and England entered a state of disarray. Christianity which was the legacy of the roman occupation withered, as the Angles and Saxons where pagans. The Anglo-Saxons occupied most of the British isles, the proceeded to divide Britain into various Kingdoms (Wessex, East Anglia, Mercia, Northumbria) each governed by there own royal family. The Vikings, hampered by there inability to colonize in there native Scandinavia were driven to find more thriving and plentiful lands in which the can settle. ...read more.

In the years that followed the government continued in their quest to restrict immigration or undesirables. It started due to the Home Office's negligence in keeping tabs on the vast influx of migrants from the Indian sub-continent. As a consequence the British Government instructed its overseas empires to restrict the issue of travel documents to persons wishing to travel to Britain. The empire agreed, and from the 1930s referred to London with regard to applications for travel documents to Britain. To be able to gain right to settle in Britain, an applicant had to be 'skilled' and have a sponsor in Britain who could provide certain guarantees. However the final decision lay at the feet of the government. The influence this would have on immigration would become apparent. The discrimination and poor treatment endured by the coloured sea men and the implementation of what had effectively become an anti immigration policy provided an explanations for the slow growth of the black and Asian population that had flourished during the WWI, with the uncertain nature of the shipping industry, there economic position diminished, that is until the second world war begun and immigrants became useful again. Immigrants came were invited over in droves to provided cheap labour and work to rebuild Britain which had been ravaged by war after 1945. They not only played a vital role in establishing the economy and regenerating public services but they also invigorated British culture introducing their own unique brand of food, fashion, music and the arts. The Second World War and the decade that followed, was a period of particular significance in the forming of a multicultural Britain. There came about a number of key changes in the relationship between Britain and its empire, which just so happened to make immigration control more problematic. There was a shift towards self determination of territories whose polices towards migration of their population had previously been under the firm control of the Home Office. ...read more.

Also they were convinced that asylum seekers were attracted to the UK in part by the easy access to welfare which the 1999 act stopped and replaced with a voucher system. But Tony Blair who faced a shortage of skilled labour, he went against public opinion and opened up Britain's labour market to foreign labour. Thus leaving putting Britain on the map as a country which is pro immigration, in way that under the conservatives seemed impossible. It is funny that Britain a country, with a long and proud history of flexing its imperial muscle, sailing the seven seas and imposing their will on countries when the saw fit, will now begin to object to the movement of the very same people to the British isles. Immigration legislation tends to masquerade as a means that would benefit the so called indigenous of Britain, but the truth is that it is also a powerful tool which the Bourgeoisie can attempted to divide its workers. I hope that I have shown it my essay that nearly every piece of immigration legislation had been accompanied with the rationale that immigrant's workers are to blame for all the wrongs in society and that without them; it would make for a better Britain. The truth as been and will always be is under capitalism, the working class will ways been made to compete for the economic resources allowed to us by the Bourgeoisie. r****t ideology continues as immigrants are seen as easy targets, despite the fact that immigrants are said to be four times more likely to be living in poverty. The fact of the matter is, like it or not, more and more of us would fail Norman Tebbits Cricket test. In other words there are many immigrants who have established themselves in Britain, but because of the hostility they received, they do not feel apart of the British nation. ...read more.

This is a very wide ranging exploration, with a sweeping knowledge of immigration history shown. The author does not shy away from judgments but at times they needed to be accompanied by more evaluation to enable them to be supported. Grammatical errors are a further weakness. 3 out of 5 stars.