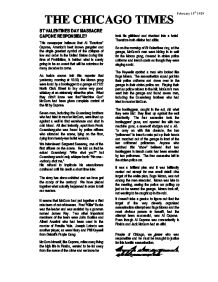 ST VALENTINES DAY MASSACRE CAPONE RESPONSIBLE? This newspaper believes that Al "Scarface" Capone, America's best known gangster and the single greatest symbol of the collapse of law and order in the United States during this time of Prohibition, is behind what is surely going to be an event that will be notorious for many decades to come. An inside source told this reporter that yesterday morning at 10.30, the Moran gang were lured by a bootlegger to a garage at 2122 North Clark Street to buy some very good whiskey at an extremely attractive price. What they didn't know was that "Machine Gun" McGurn had been given complete control of the hit by Capone. Seven men, including the Gusenberg brothers who had tried to murder McGurn, were lined up against a wall in that warehouse and shot in cold blood. ...read more.

Two other important members of the team were John Scalise and Albert Anselmi who had been used in the murder of Frankie Yale. Joseph Lolordo was another player, as were Harry and Phil Keywell from Detroit's Purple Gang. McGurn himself, like Capone, miles away living the high life in Florida, wanted to be far away from the scene of the crime and we know he took his girlfriend and checked into a hotel. Therefore both villains had alibis. So on the morning of St Valentines day, at the garage, McGurn's men were hiding in to wait for the Moran gang, dressed in stolen police uniforms and trench coats as though they were staging a raid. The Keywells spotted a man who looked like Bugs Moran. ...read more.

The four assassins left in the stolen police car. It was a brilliant plan and it was brilliantly carried out except for one small detail --the target of the entire plan, Bugs Moran, was not among the men executed. Moran was late to the meeting, seeing the police car pulling up just as he neared the garage. Moran took off, not wanting to be caught up in the raid. It doesn't take a genius to figure out that the target of the very cleverly organised assassination attempt was Bugs Moran and the most obvious person to benefit, had the attempt been successful, was Al Capone. Even though Al Capone was conveniently in Florida and Jack McGurn had an alibi. People of Chicago, we know who was responsible and he must be brought to justice for this horrific assassination. This report has been filed, for obvious reasons, by an anonymous correspondent THE CHICAGO TIMES ...read more.