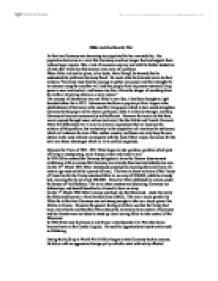 Hitler and the Road to War

Hitler and the Road to War At this time Germany was becoming too populated for her own stability. Her population had come to a level that Germany could not longer feed and support them without huge imports. She a lack of resources anyway and with the further deduction of land after Versailles this became even more of a problem. When Hitler laid out his plans, in his book; Mein Kampf, he showed that he understood the problems Germany faced. He wrote what he believed was to be their solution; "Germany must find the courage to gather our people and their strength for an advance along the road that will lead this people from its present restricted living space to new land and soil, and hence also free it from the danger of vanishing from the earth or of serving others as a slave nation." The concept of lebensraum was not Hitler's own idea, it had been brought to light decades before for in 1871. Lebensraum had been a popular political slogan in the establishment of Germany in the need for living space which in turn would strengthen Germany by helping to solve internal problems, make it militarily stronger, and help Germany to become economically self-sufficient. ...read more.

However Hitler defended his actions under the banner of "self-defence," for as no other country was disarming, Germany lay defenceless, and should therefore be allowed to have an army. On the 7th March 1936 Hitler's troops marched into the Rhineland. Under the treaty the Rhineland became a Demilitarised Zone (DMZ). This was a major gamble by Hitler for at this time Germany was not strong enough to take on a major power like Britain or France. However the general feeling in Britain was that the Treaty had been overly harsh and therefore Hitler should be allowed to have control of Germany and the French were not about to stand up alone leaving Hitler to take control of the Rhineland. In 1936 Hitler sent his forces to aid France in the Spanish Civil War (the forces became know as the Condor Legion). He used his opportunity to tryout tactics such as Blitzkrieg. During the build up to World War II Hitler began to take Germany back to success. He did so with an aggressive foreign policy which to start with solely affected Germany but he became more and more daring, testing the mentality of the European powers. ...read more.

For it was Mussolini who prevented Hitler's earlier 'invasion' of Austria however Hitler invited Mussolini to Berlin where he overawed the Italian man and so when the topic of Austria came up again, Mussolini did nothing leaving it for Hitler. It was the invitation of Mussolini to the Berlin and consequent meeting between the leaders that change Mussolini's attitude (showing Mussolini's uncertainty). Consequently Mussolini supported all of Hitler actions, allying with him during World War 1. America was not really in a position to medal with European politics (and therefore oppose Hitler) for although she had the capability, public opinion realised the importance of her trade links (due to the general economic slump) but also was totally against war. USSR is the final possible power with the potential to challenge Hitler however Russia, like the French, was not about to enter another war alone. Also the USSR was not really ready or in the position to counter Hitler for Stalin had believed in the phrase "the war to end all wars" and consequently had not invested heavily in the military although this was to change. On top of this the general hatred of communism in Europe may have weighed against had decisive move by Stalin against Hitler, a non-communist state. ...read more.