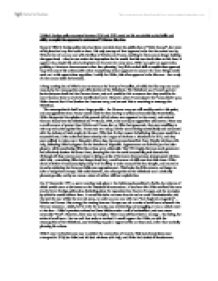 &quot;Hitler's foreign policy successes between 1936 and 1939 rested on his remarkable tactical skills and ability to exploit his opponent's weaknesses?&quot; Discuss this view.

"Hitler's foreign policy successes between 1936 and 1939 rested on his remarkable tactical skills and ability to exploit his opponent's weaknesses?" Discuss this view. Many of Hitler's foreign policy aims had been recorded since the publication of "Mein Kampf", but none of his plans had any time scale to them. His only concept of time appeared to be that he wanted war by 1942, in fear of an arms race with the likes of Britain and France, resulting in Germany no longer holding the upper hand - also, he was under the impression that he would face his own death close to this time. It appears that, despite his aims having been set in stone for many years, Hitler was quite an opportunist, grabbing at fortunate circumstances rather than planning. Very little tactical skill or exploitation appeared to go into any of his actions (with minor exceptions); he just appeared to assume that most things would work out to his expectations regardless. Luckily for Hitler, this often appeared to be this case - but rarely via the means which he intended. A long running aim of Hitler's was to overturn the Treaty of Versailles, of which the first step was made towards by the reoccupation and militarisation of the Rhineland. The Rhineland was France's greatest barrier between itself and the German threat, and so it would be fair to assume that they would be far more than just keen to retain its demilitarised state. ...read more.

In this situation, Goering was the one displaying tactical skill, and not Hitler. Following the fortunate success of Anschluss, Hitler was encouraged to push forwards to Czechoslovakia. His first aim was the predominately German speaking Sudetenland, which he hoped to seize by means of a small war. He was to be faced by Neville Chamberlain and his policy of appeasement however, with whom he met on 15th September 1938, at Berteschgaden. Here, Hitler demanded the swift takeover of the Sudetenland, with threat of military action. No visible plan from Hitler here - it appears that he hoped to gain what he desired by threats and pressure. Following discussions between Britain and France, it was agreed that areas of over 50% German population within the Sudetenland would be handed over to Hitler, without so much as the formality of a plebiscite. Seeing that he had the upper hand, and knowing that Britain and France were reluctant to go to war (particularly over Czechoslovakia), Hitler rejected this agreement at his second meeting with Chamberlain on 22nd September 1938, on the grounds that it "would take too long to implement". Instead, he demanded that the German army be able to occupy the Sudetenland within 2 days (claiming that the Czechs were slaughtering Sudeten Germans), and that the Czechs met the territorial demands of Poland and Hungary. Benes rejected these demands, and rebelled against Anglo-French pressure, ordering military mobilisation. On 26th September, Hitler gave the Czechs 24 hours to agree to hand over the Sudetenland before 1st October. ...read more.

To Hitler, this had all been a great success - not only was he in a great for the invasion of Poland, but also for the invasion of Russia later on. German troops entered Poland on 1st September 1939, and to Hitler's dismay, Britain and France declared war on 3rd September. The road leading up to the invasion of Poland shows that Hitler could put tactical skill and exploitation to good use when required. Forging relations with the Baltic republics and small east European nations left Poland with little to no German opposition surrounding it, but Ribbentrops Nazi-Soviet pact was by far the most effective tactic against Poland. It allowed both a great offensive against Poland, and a pathway to the invasion of Russia in the future. As with the Anschluss of 1938, this was a great success in foreign policy - but not, for the most part, thanks to himself. It is clear to see that Hitler's foreign policy success rarely laid thanks to his own skill, exploitation or tactful planning, particularly prior to the fall of Prague. Although these feats would unlikely have been achievable without any display of skill, Hitler was very fortunate that the situations around him played well into his hands, such as Britain's insistence on appeasement concerning the Sudeten crisis. Hitler also owed a lot of thanks to the likes of Ribbentrop and Goering, each who stepped in and allowed some of the successes to happen. The success of Hitler's foreign policies between 1936 and 1939 did not rest on him at all - they merely benefited from his actions, the aid of those around him, and the situations which created them. ...read more.