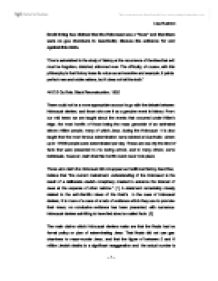 David Irving has claimed that the Holocaust was a "hoax" and that there were no gas chambers in Auschwitz; discuss the evidence for and against this claim. "One is astonished in the study of history at the recurrence of the idea that evil must be forgotten, distorted, skimmed over. The difficulty, of course, with this philosophy is that history loses its value as an incentive and example; it paints perfect men and noble nations, but it does not tell the truth." -W.E.B Du Bois, Black Reconstruction, 1935. There could not be a more appropriate account to go with the debate between Holocaust deniers, and those who see it as a genuine event in history. From our mid teens we are taught about the events that occurred under Hitler's reign, the most horrific of those being the mass genocide of an estimated eleven million people, many of which Jews, during the Holocaust. It is also taught that the most famous extermination camp existed at Auschwitz, where up to 10'000 people were exterminated per day. These are exactly the kind of facts that were presented to me during school, and to many others; some individuals, however, claim that this horrific event never took place. Those who claim the Holocaust did not appear as traditional history describes, believe that "the current mainstream understanding of the Holocaust is the result of a deliberate Jewish conspiracy created to advance the interest of Jews at the expense of other nations." ...read more.

But that the "Holocaust - the alleged extermination of some six million Jews (most of them by gassing) - is a hoax and should be recognized as such by Christians and all informed, honest and truthful men everywhere." More than being just a pro-n**i viewpoint, Holocaust deniers believe that the death-toll amount which is widely accepted is a falsehood in an attempt to get more compensation, and sympathy. It is believed that the interest of the Zionist movement is to augment the amount of Holocaust deaths so that their gains will be greater. (5) The Holocaust deniers maintain that the Holocaust is a myth in order to establish the possibilities which can occur when an individual or group of people try to play God. This claim may have resulted from various factors, and in many cases of a denial, a particular political agenda backs it up, along with their own personal beliefs colouring their view. To fully understand the claims of these people, both sides of the debate must be looked at. The case which acknowledges the Holocaust as it is presented has much more convincing evidence, the most notable of which being photographs, video footage and personal accounts. Where the Holocaust deniers get their supposed evidence from however, is the jigsaw in which the evidence which shows the Holocaust as the event we're taught it to be is made up of. ...read more.

Of course, the issue which arises with both of these claims, and history as a whole, is that unless someone is actually present at an event and experiencing something, they have no way of knowing exactly what went on during a given time and date. It is for these reasons which we need to rely on sources other than ourselves to understand the past, and a primary source is the most reliable place to look first. Talking with a Holocaust survivor, reading the diaries like that of a certain Anne Frank hiding from the Gestapo, and looking at pictures and videos from n**i Germany at that time allows for the closest link possible from today to the days gone by, and rejecting these ideas as a fabrication severs the best link to the truth. Holocaust deniers will be inclined to believe what they want to be true, even if it does not match up historically. The Holocaust was a dismal time not only for the Jewish race, but also a cataclysmic event in the history of mankind. The idea that not all people are equal and those of less value need to be exterminated is a notion that should never have occurred. The evidence that we have today appears to confirm that the Jewish Genocide by the n**i people was a real event. In addition, it is extremely difficult to reasonably doubt this event and believe that people would lie about such an ordeal. ...read more.