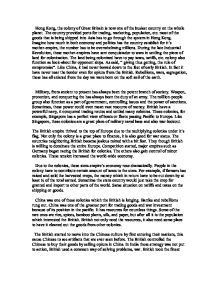 Hong Kong, the colony of Great Britain is now one of the busiest countries on the whole planet.

Hong Kong, the colony of Great Britain is now one of the busiest country on the whole planet. The country provided ports for trading, marketing, population, etc. most of the goods that is being shipped into Asia has to go through the system in Hong Kong. Imagine how much in both economy and politics has the country establish for it's mother-empire, the number has to be overwhelming trillions. During the late Industrial Revolution, these mother-empires have sent conquistador to wars in settling the piece of land for colonization. The land being colonized have to pay taxes, tariffs, etc. colony also function as look-about for opponent ships. As said, " giving thus getting, the rule of compromise". Like China, it had never bowed down to the feet of early British. In fact it have never near the border even for opium from the British. ...read more.

The countries neighboring British became jealous mixed with a bit fear. They though British is willing to dominate the entire Europe. Competition started, major empires such as Germany began racing the British for colonies. The others also gain control of minor colonies. These tension increased the world-wide economy. Due to the colonies, these stem-empire's economy rose dramatically. People in the colony have to contribute certain amount of taxes to the stem. For example, if farmers has raised and sold the harvested crops, the money which in return have to be cut down by at least 1/4 of the total earned. Sometime the stem country would just take the crop for granted and import to other parts of the world. Same situation on tariffs and taxes on the shipping or goods. China was one of these colonies which the British is longing. ...read more.

India became one of the thriving port under the control of British, it had trading, merchant, etc everywhere. The country of India did broke the chain of prison started by the British rebellion in 1857. the religious belief caused Indians to rebel. Ghanndi later struggle for the freedom of India by boycotting British goods and ceasing the economy for British from India. These colonization caused great tension in both social and racial segregations. The people being colonized hated the people of stem-empires. Thus these problems can be seen in the racism within most of the country. That is why most of the people join the British army for a spin outside their small village. The army also made them proud and protected from these segregation. The colonies really did a great job on both the economy and military factors for the stem country. The colony also boosted the world wide economy due to the competition within different empires. These competition and colonies later lead to the system we have now. ...read more.