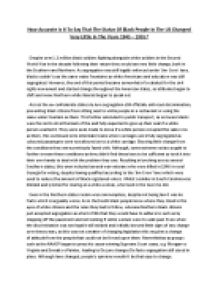 How Accurate Is It To Say That The Status Of Black People In The US Changed Very Little In The Years 1945 1955?

﻿How Accurate Is It To Say That The Status Of Black People In The US Changed Very Little In The Years 1945 ? 1955? Despite over 1.2 million black soldiers fighting alongside white soldiers in the Second World War in the decade following their return they would see very little change, both in the Southern and Northern. As segregation was still legally enforced under ?Jim Crow? laws, blacks couldn?t use the same water fountains as white Americans and education was still segregated. However, the end of this period became somewhat of a catalyst for the civil rights movement and started change throughout the American states, as attitudes began to shift and move Northern white liberals began to speak out. Across the ex-confederate states de Jure segregation still officially enforced discrimination, preventing black citizens from sitting next to white people in a restaurant or using the same water fountain as them. ...read more.

Even when the discrimination was not legal it still existed and initially showed little signs of any change over these years, as this was not a matter of changing legislation this requires a change of attitude from the people that could not be forced upon them. Nevertheless as groups such as the NAACP began to press his cause winning Supreme Court cases, e.g. Morgan vs Virginia and Sweatt vs Painter, leading to De jure changes De facto segregation still stood in place. Although laws changed, people's opinions wouldn?t be that easy to change. Although after the during the Second World War black soldiers first experienced segregation across Europe and even though it still existed they saw the stark contrast in lifestyles they had to their own. Resulting in a rise of black consciousness across America as they not only began to question the segregation they were faced with, but saw what they could achieve when they stood together for a cause. ...read more.

The Fair Deal housing programme demolished badly constructed houses but fewer houses were built than was anticipated; thus reducing the amount of housing actually available worsening the issue. Truman also made an Executive Order segregated the army and guarantying equality of treatment and opportunity for all persons in the armed services without regard to race, colour, religion or national origin. Allowing 1.2 million black men to join the United States army during WWII. Northern blacks were also often trained in the south and this was their first experience of de Jure segregation, opening their eyes to the severity of the issue In conclusion, despite their initially appearing to have been little change made during this decade it can be seen that change was on the agenda with the ?Fair Deal? program attempting to improve black housing, desegregation of the army and black people now holding government positions. However, these changes still only addressed the issue of de Jure segregation changing Southern legislation leaving the Northern problem of changing attitudes and perceptions with little to no change made. ...read more.