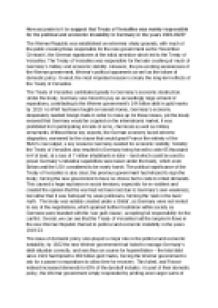 How accurate is it to suggest that Treaty of Versailles was mainly responsible for the political and economic instability in Germany in the years 1919-1923?

﻿How accurate is it to suggest that Treaty of Versailles was mainly responsible for the political and economic instability in Germany in the years 1919-1923? The Weimer Republic was established on extremely shaky grounds, with much of the public viewing those responsible for the new government as the ?November Criminals?, the German signatories of the initial armistice which led to the Treaty of Versailles. The Treaty of Versailles was responsible for the later crushing of much of Germany?s military and economic stability. However, the pre-existing weaknesses of the Weimar government, Weimar?s political opponents as well as the failure of domestic policy. Overall, the most important reason is clearly the long-term effects of the Treaty of Versailles. The Treaty of Versailles contributed greatly to Germany?s economic destruction. Under the treaty, Germany was forced to pay an exceedingly large amount of reparations, contributing to the Weimer government?s 144 billion debt in gold marks by 1919. As WWI had been fought on loaned money, Germany?s economy desperately needed foreign trade in order to make up for these losses, yet the treaty ensured that Germany would be crippled on the international market; it was prohibited from participating in trade of arms, chemicals as well as military armaments. Without these key exports, the German economy faced extreme stagnation, worsened by the clause that would grant France the entirety of the Ruhr?s coal output, a key resource Germany needed for economic stability. ...read more.

Instead of encouraging German industry, the government enacted the policy of ?passive resistance?; workers were encouraged to strike to defy the will of their French occupiers, while the government shouldered even greater debt by promising to pay the workers their wages. This was a significant failure of domestic policy, and the German economy, now facing both French hostility and economic downturn was essentially crippled. The political implications were also clear ? the government faced increasingly hostile opinion for the mismanagement of the economy. Instead of pacifying opposition to domestic policy, the government ordered that one sector of the Freikorps should disband, an order that was defied by their leader, who instead organised a march onto Berlin and the later Kapp Putsch. Most notably the weakness of domestic policy was revealed in this instance; the Weimer government ordered the central army to supress the march, only to have its orders refused by the army, and served as proof of the political instability that existed, where the government had little control. While domestic policy was a key failure, it is not as important as the underlying Treaty of Versailles due to the fact that many of the economic problems and social unrest were created by the treaty, and arguably no matter how successful domestic policy was Germany would always be economically strained by the treaty, at unease socially. ...read more.

While this factor was an inherent weakness, it is overall the least important as demonstrated by the use of the army to crush dissent, and the fact that Article 48 was only enacted during times of crisis such as the Munich Putsch, and even so arguably within reason. Overall, it is clear that the Treaty of Versailles was the key cause of political and economic instability. Initially crippling the German economy, it also served to suppress any attempts for recovery, especially with the later French occupation of the Ruhr under the treaty. While the government?s domestic response to the treaty was a general failure such as the policy of passive resistance, it is clear that without the treaty, the government would have been able to deal with the economic implications much more effectively. The Treaty of Versailles can also be seen to be the root cause of the political divide within Germany, such as the right-wing groups forming the ?stab in the back myth? while left-wing groups enacted numerous strikes that further crippled the economy. The Weimer constitution remained an inherent weakness, but remains the least significant as the government proved that extremist views could be quashed in the short-term. Therefore, it is clear that the Treaty of Versailles is mainly responsible for the economic and political instability in the years1919-23. ...read more.