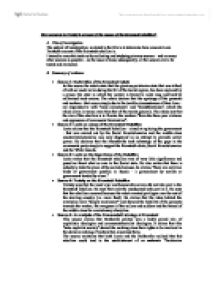 How accurate is Trotsky's account of the causes of the Kronstadt rebellion?

How accurate is Trotsky's account of the causes of the Kronstadt rebellion? A. Plan of investigation The subject of investigation, as stated in the title is to determine how accurate Leon Trotsky's account of the Kronstadt rebellion is. I intend to carry this task out by collecting and studying primary sources - and as many other sources as possible - on the issue at hand, subsequently, all the sources are to be tested and evaluated. B. Summary of evidence * Source 1: Declaration of the Kronstadt rebels In this source the rebels state that the glorious proletarian state that was talked of with so much verve during the fall of the tsarist regime, has been replaced by a prison like state in which the worker is forced to work long and hard by militarised trade unions. The rebels declare that the uprisings of the peasants and workers - that occur simply due to the terrible circumstances of their lives - are responded to with "mass executions", and "bloodthirstiness", which the rebels claim is worse even than that of the tsarist generals. The rebels say that the aim of the rebellion is to liberate the workers "from the three-year violence and oppression of communist Domination". ...read more.

Also if we look into later years we see the communist dictatorship that was established; hence perhaps it was already rearing its ugly head at this time. Secondly, the rebels allege that all the uprisings that take place due to the lack of food, terrible working conditions etc. are responded to with "mass executions", and "bloodthirstiness". Here I am forced to be slightly sceptical. Yes, it is true that the Bolsheviks crushed all the uprisings that took place. But were their methods of crushing them as severe as the methods described? Perhaps it would be advisable to tone the remarks down to come to the real story? Ultimately, the rebels claim that the aim of the rebellion was to liberate the workers "from the three-year violence and oppression of communist Domination". This is an extremely reactionary statement and to some extent unmasks the disguised attempt to promote soviet power that Lenin talks about; It does this by showing the rebels desire to gain control as everyone did in Russia at the time. I believe that it illustrates the rebel's resentment towards the Bolsheviks and jealousy towards them for not getting to the "throne" first. Also this source is taken from What We Are fighting For, News of the Kronstadt Temporary Revolutionary Committee, and may be subject to propaganda aimed at getting the rebels rallied up for the rebellion ahead. ...read more.