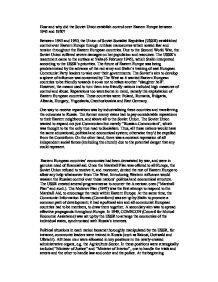 How and why did the Soviet Union establish control over Eastern Europe between 1945 and 1950?

Between 1945 and 1950, the Union of Soviet Socialist Republics (USSR) established control over Eastern Europe through ruthless manoeuvres which sowed fear and tension throughout the Eastern European countries. Due to the Second World War, the Soviet Union suffered severe damages on her population and resources. The USSR’s resentment came to the surface at Yalta (6 February 1945), which Stalin interpreted according to the USSR’s priorities. The future of Eastern Europe was being predetermined by the advance of the red army and Stalin’s training of east European Communist Party leaders to take over their governments. The Soviet’s aim to develop a sphere of influence was consented by The West as it wanted Eastern European countries to be friendly towards it so as not to reface another “slaughter hell”. However, the means used to turn them into friendly nations included high measures of control and abuse. Reparations too were borne in mind, namely the exploitation of Eastern European countries. These countries were: Poland, Rumania, Bulgaria, Albania, Hungary, Yugoslavia, Czechoslovakia and East Germany.

One way to receive reparations was by industrialising these countries and transferring the outcomes to Russia. The former enemy states had to pay considerable reparations to their Eastern neighbours, and above all to the Soviet Union. The Soviet Union wanted to expand not just Communism but merely “Russian-Communism”, which was thought to be the only true road to Socialism. Thus, all these nations would have the same educational, political and economical system; otherwise they’d be expelled from the Cominform. On the other hand, there was a constant repression of all independent social forces (including the church) due to the potential danger that any could represent.

Eastern European countries’ economies had been devastated by war, and were in genuine need of financial aid. Once the Marshall Plan was offered to all Europe, the Soviet Union refused to receive it, and moreover, denied the rest of Eastern Europe to allow any help whatsoever from The West. Introducing Western influence would weaken the Russian control over these nations’ political and economical structure. The USSR created several programmes as to counter the American ones (“Marshall Plan” and such.). The Molotov Plan (1947) was the first attempt to respond to the Marshall Aid, to encourage the trade within Eastern Europe. At the same time, the Communist Information Bureau (Cominform) was set up by Stalin to promote a common path of development; it had a political aim and all communist European countries had to be members, to draw them together. A secondary aim was to spread effective propaganda throughout Europe. In 1949, COMECON (Council for Mutual Economic Assistance) was set up by the USSR to arrange the economies of the individual states, synchronised with Russia’s interests.

Political situations in each nation became thoroughly manipulated by the USSR, for instance, communist leaders were trained in Russia (such as Rakosi, Gottwald and Ulbricht). All these men were allocated in key positions in the newly-created administrative organs, e.g. the Agriculture Sector. In these positions were strategically included “Minister of Justice” and “Minister of Interior”, one to handle the trials and arrests and the other to handle law and order and the police. At the beginning communist parties made coalitions with other parties, thus interfering gradually. On the other hand, Soviet interference led to rigged elections in order to make sure the opposition wouldn’t represent a powerful threat. Nevertheless, too many “dangerous people were hindering Soviets plans; consequently the USSR saw another solution, the Salami tactics, which consisted in slicing off pro-democracy politicians progressively. One specific case is the coup in Czechoslovakia in February in 1948. Despite being initially a fairly democratic country, the USSR took advantage of the economical and political instability which Czechoslovakia was going through. When several non-communist ministers resigned, Gottwald (communist Prime Minister) managed to get their resignations accepted. They all were replaced with Communists. Furthermore, the non-communist Foreign Minister, Jan Masaryk, was found dead in March. The USSR wanted no opposition in order to have utter control and hence generate policies favourable to the USSR, eventually only communist parties were allowed to participate. Most opponents were linked to either Nazis or Fascists. The establishment of one-party rule on Soviet lines was a phase that was largely completed by the end of 1948


Brute force was as well used to repress subversiveness. The so-called Red Army was originally seen as the liberator from Nazism, during the war-time resistance. Later on it became part of the Russian policy of fear and intimidation, with which people were inhibited from standing up against the imposed system. Civil population suffered numerous abuses by the Soviet soldiers. As for the estate secret police, the USSR did count with one, being it the AVO. These intelligence programmes had expedients of every single person and therefore it was quite easy to keep track of suspicious people. All this monitoring turned these countries into a kind of unity under the Soviet leadership. This unity is basically the USSR’s desire of making the Soviet sphere of influence an economic area from which the USSR could swiftly recover form the severe setbacks the industrial process in the Soviet Union had suffered during the war.

However, certain psychological means were employed so as to content the peoples of Eastern Europe, and so disguise the real intentions as progressive ones. Peasants gave their support to the Soviet Union due to the Land Reform Policies.

In order to achieve absolute “Russification”, the Soviet Union didn’t tolerate any other brand of communism, as this would represent independence from the USSR, i.e. no longer easily abused. Yugoslavia addresses this situation. The leader of Yugoslavia, Tito was widely popular for his patriotic deeds which helped to get rid of Nazism without the intervention of the Red Army’s forces. Thereafter, Tito symbolised a danger as other countries might try to establish their own style of communism, independent from the USSR. Tito also wanted to trade with The West as well as with the USSR, which could be cast as a betrayal. In this particular issue, Stalin couldn’t risk of mobilizing the Red Army due to Tito’s popularity over Yugoslavia posing an uncertain triumph, as well as a response from the West.   Nevertheless, Stalin expelled Yugoslavia from the Cominform.

As agreed at Yalta and Potsdam, the Soviet Union was awarded her zone in Germany. Even though each superpower was supposed to encourage economic development over its zone, the USSR broke her promise regarding East Germany by draining its resources away to Russia. As a response to the introduction of a new currency in the West zones, the Soviet Union closed all road, rail and canal links between West Berlin and West Germany, so as to compel the West (USA, Great Britain and France) to withdraw from West Berlin.

The paranoia of the USSR must be understood in the historical context it experienced during the twentieth century. The Soviet Union had created a negative idea of the West, which she looked at with jealousy but not with lightness. Stalin might resemble Machiavelli along his pursuit. The Soviet Union was resented and her experience forced her into hostile means of action. As Stalin, in 1946, said, “Communism and Capitalism could never live peacefully together, and future warts are inevitable until the final victory of communism was achieved.”