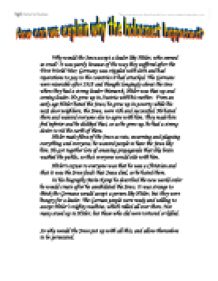 How can we explain why the holocaust happened?

Why would the Jews accept a leader like Hitler, who seemed so cruel? It was partly because of the way they suffered after the First World War; Germany was crippled with debt and had reparations to pay to the countries it had attacked. The Germans were miserable after 1918 and thought longingly about the time when they had a strong leader-Bismarck. Hitler was that up and coming leader. He grew up in Austria with his mother. From an early age Hitler hated the Jews, he grew up in poverty while his next door neighbors, the Jews, were rich and successful. He hated them and wanted everyone else to agree with him. ...read more.

In his biography Mein-Kemp he described the new world order he would create after he annihilated the Jews. It was strange to think the Germans would accept a person like Hitler, but they were hungry for a leader. The German people were ready and willing to accept Hitler's mighty machine, which rolled all over them. Not many stood up to Hitler, but those who did were tortured or killed. So why would the Jews put up with all this, and allow themselves to be persecuted. The Jews believed (and still do) that they are Gods chosen people, and that God would protect and bless them throughout all time. Throughout history Jews have always been very successful. ...read more.

After 1948 the majority of the world agreed that the Jews should have their land back, and they did get it back, but the Arabs are unhappy about it and are still fighting with them to this very day. Going back in History several thousand years to pre-history, Israel was promised to Abraham about 3000BC but it wasn't till king David's time that they possessed all the land. They fought with their neighbors and it was the Babylonians that first drove them from their land, then the Abyssinians, Persians and Romans, and to this very day people still persecute them. AD70 the temple was demolished and still hasn't been rebuilt. On Saturday two synagogues were attacked in Istanbul killing twelve, two hundred injured. There is still a lot on anti-Semitism and hatred towards the Jews. ...read more.